Kathy Hohenadel and Vickie Groff live in the home where they grew up. “Our yard was the gathering place for the neighborhood kids,” Kathy says. Decades later, it’s still the go-to place for entertaining family and friends. Last year, they gladly shared it with patrons of Columbia’s Art in the Gardens Tour. 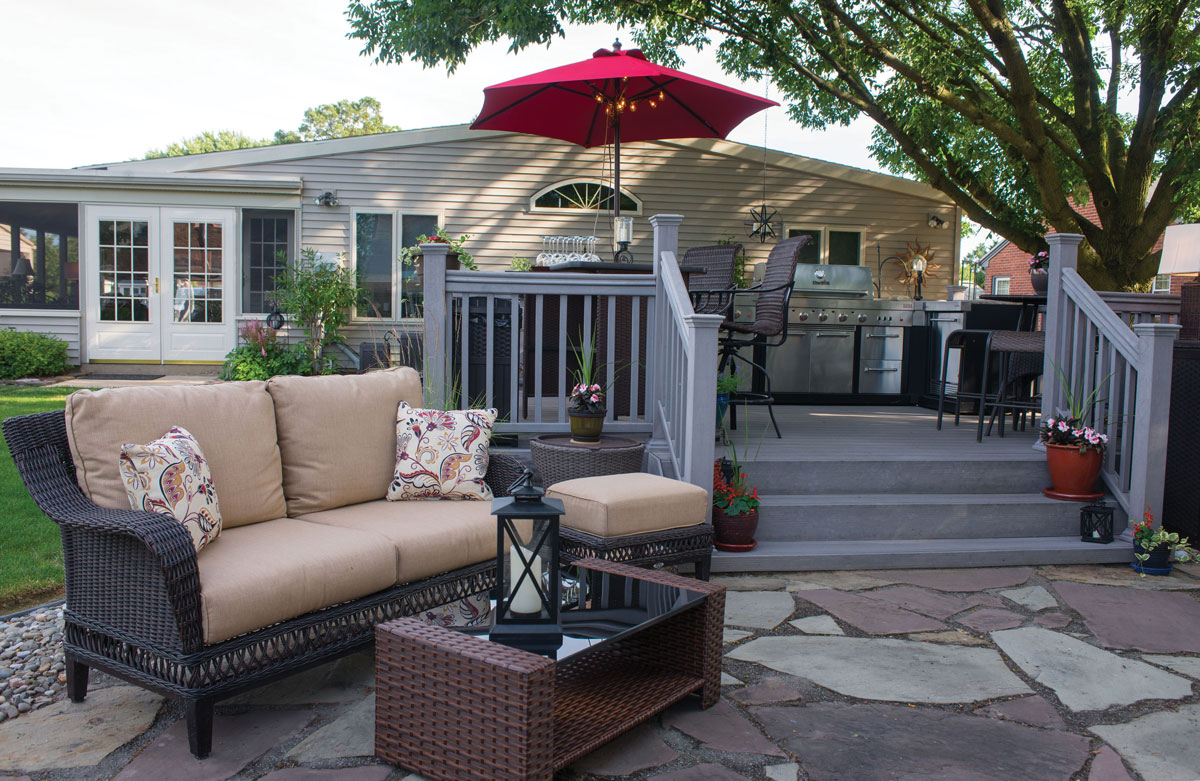 Half of the backyard is home to an outdoor-living area that was built in three phases. First, a stone patio replaced the area where a leaking above-ground pool once stood. Next on the agenda was adding a deck that contains a bar and outdoor kitchen. The final element was a pergola that serves as an outdoor dining room. The double doors on the house lead to a screened porch.

The Hohenadel sisters – Kathy, Vickie and Jolene – had a typical baby boomer childhood. Their neighborhood on the east side of Columbia represented the building boom that transformed communities during the ‘50s and ‘60s. Modern ranch-style and traditional Cape Cod designs lined its streets. While many such neighborhoods go through transitions, this one has been home to generations of the same families. “It’s a neighborhood you stayed in or came back to,” Kathy says, noting that two “new” neighbors on the street grew up there and have returned to take over their parents’ homes.

The Hohenadels’ ranch home originally had two bedrooms. “The three of us shared a room,” says Kathy, while Vickie adds, “And, we shared a small closet.” As youngsters, the close quarters weren’t really that much of a concern to them – like other members of their generation, the sisters spent their leisure time outdoors. As in most neighborhoods, kids seemed to gravitate to certain backyards and in this case, the Hohenadels’ spacious backyard became the go-to place for playing games, hanging out or attending Mrs. Hohenadel’s “reading time” gatherings. “We always had family visit us on weekends,” Kathy recalls of the many cookouts that were held in the backyard on a Saturday or Sunday afternoon. 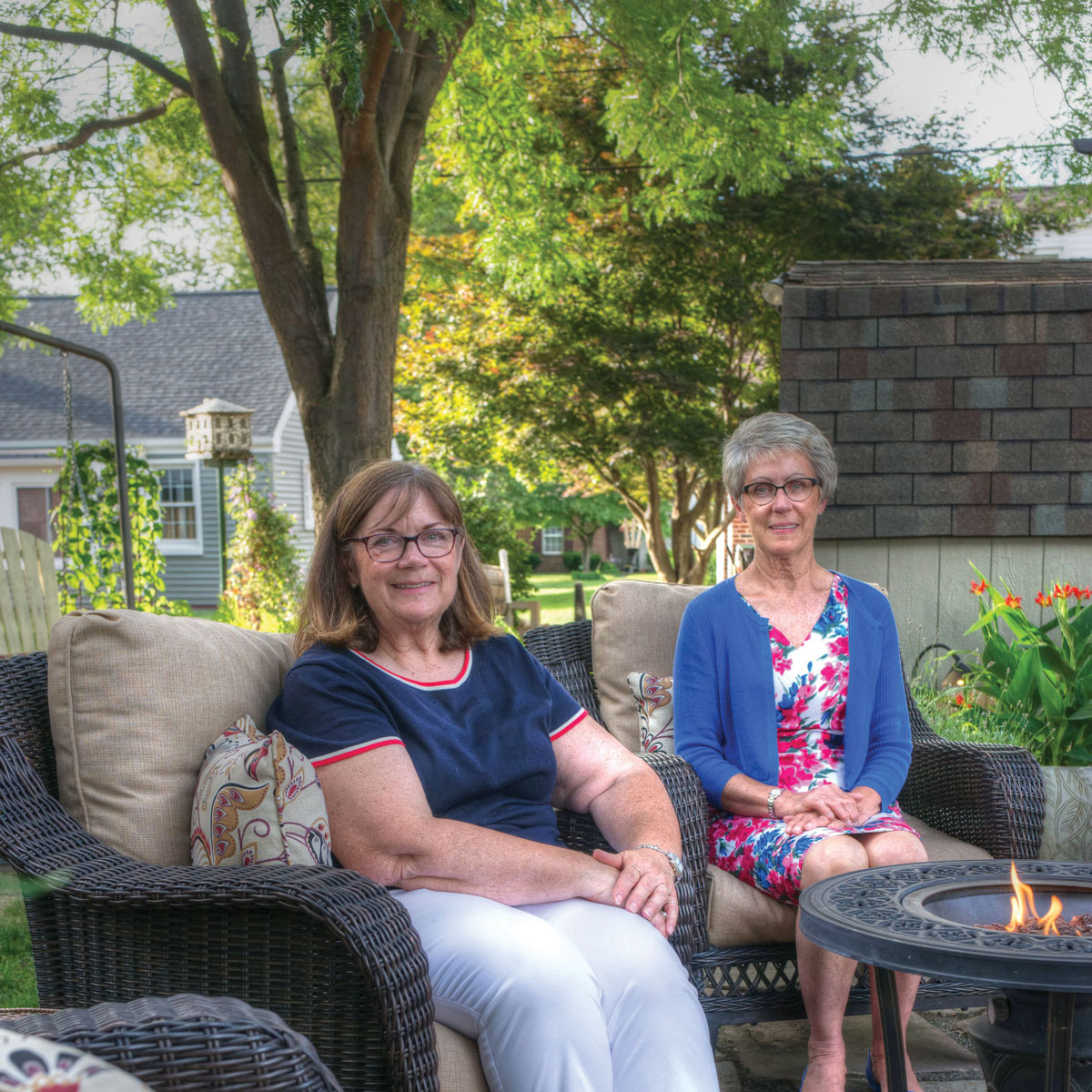 Mr. Hohenadel was a carpenter and when his daughters became teenagers, he instinctively recognized the need for their own space and transformed the basement into a suite – two bedrooms, a sitting room and a bath – for Kathy and Vickie. “He was always doing something around the house,” Kathy says of her father’s carpentry skills. “We loved the space he created for us.”

All three of the Hohenadel daughters became teachers, earning their degrees from Millersville University and working in local school districts. “I believe my mother would have liked to be a teacher,” Kathy says. The three are retired now. Kathy devotes her time to serving as the organist at her church, working part-time at Landis Homes and volunteering in the community. Vickie works for BB&T Bank. 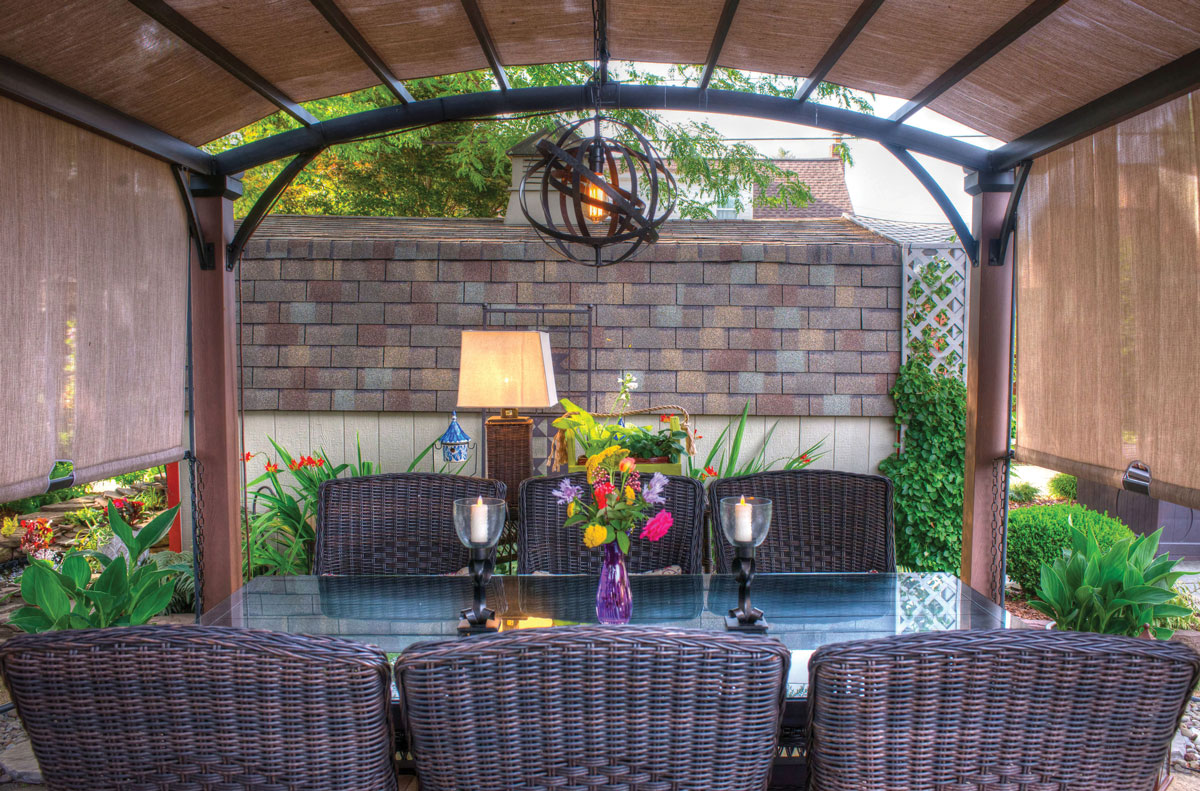 A covered pergola, which the sisters put together themselves, provides space for outdoor dining.

While they followed the career path they believe their mother would have chosen for herself, Kathy and Vickie credit their creativity and can-do spirits to their father. Those traits were put to the test just as Vickie was preparing to make the move from Lancaster to Columbia. Disaster struck when the basement was inundated from rains produced by Tropical Storm Lee (2011). “Underground streams crisscross this area,” Vickie explains. Unfortunately, the basement was in total ruins. “Everything had to come out,” Kathy says. 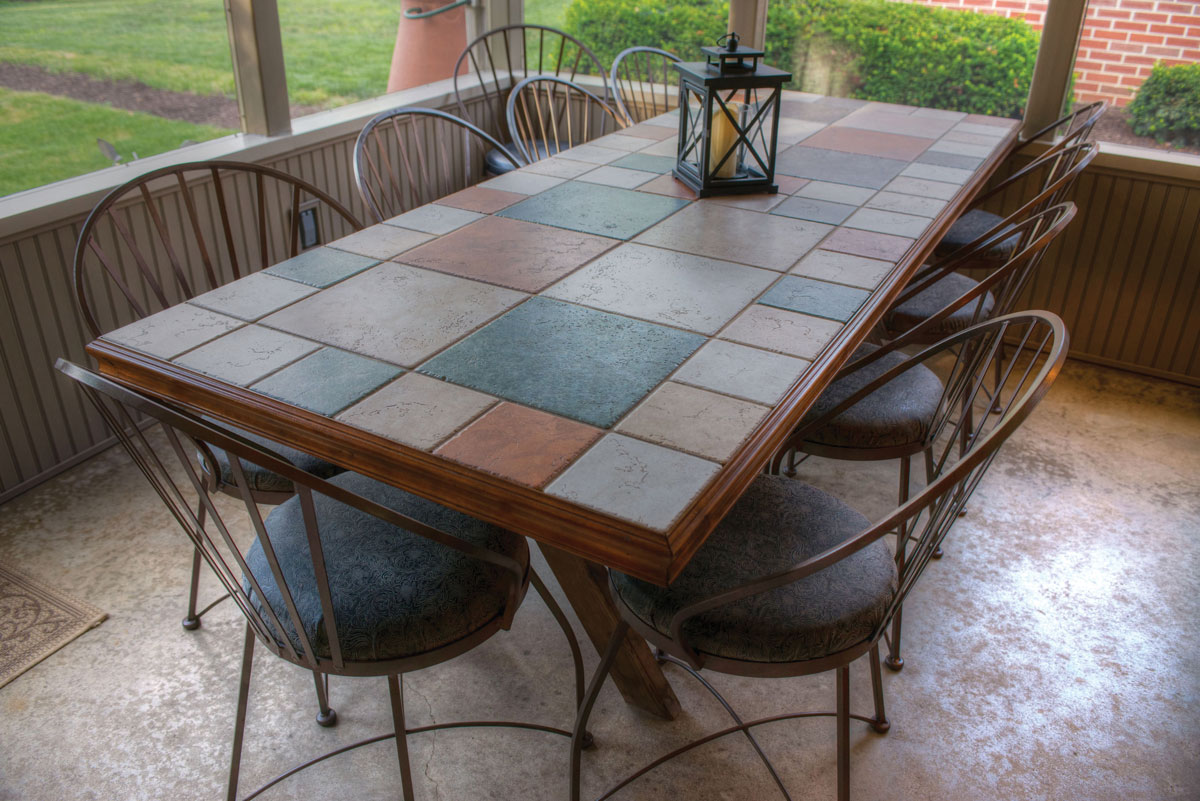 Despite their disappointment at seeing their father’s work disappear, the sisters set out  to redesign and update the lower level of the house. Seven years later, they worked with Valerie Kissinger to remodel the kitchen. They also revamped the screened porch that once wrapped around a side and across the back of the house – a gift from Vickie to her parents for helping to pay for her college education. Three years ago, they ordered a pergola from Lowe’s and put it together themselves. They also tackled a table that their father built and topped with Formica. When the Formica began to deteriorate, Kathy announced, “Let’s try a project,” suggesting they tile the tabletop. The tiling went fine but they had trouble with the wood trim and had to call a friend for guidance. “We can usually figure out how to do things,” Vickie says. 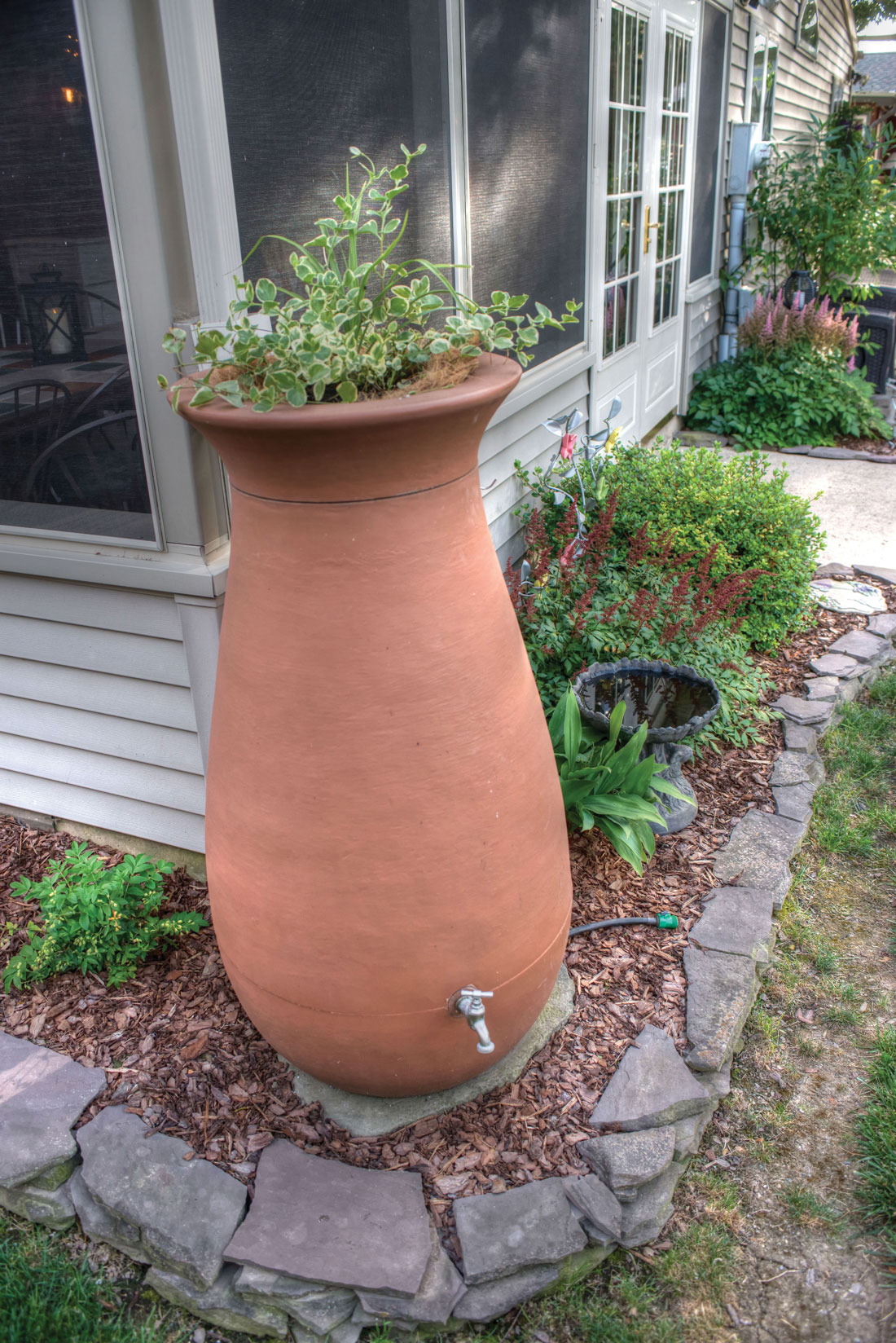 A rain barrel aids in watering the gardens.

They point to their grandfather for their interest in gardening. “He lived nearby,” Kathy explains. His house was a show-stopper due to the hybrid tea rose hedge that surrounded it. “Snyder Hardware would hold contests and his roses always won,” she recalls. Kathy and Vickie take pride in the rose bushes they grew from slips they took from their grandfather’s hedge. They estimate them to be 50 years old. 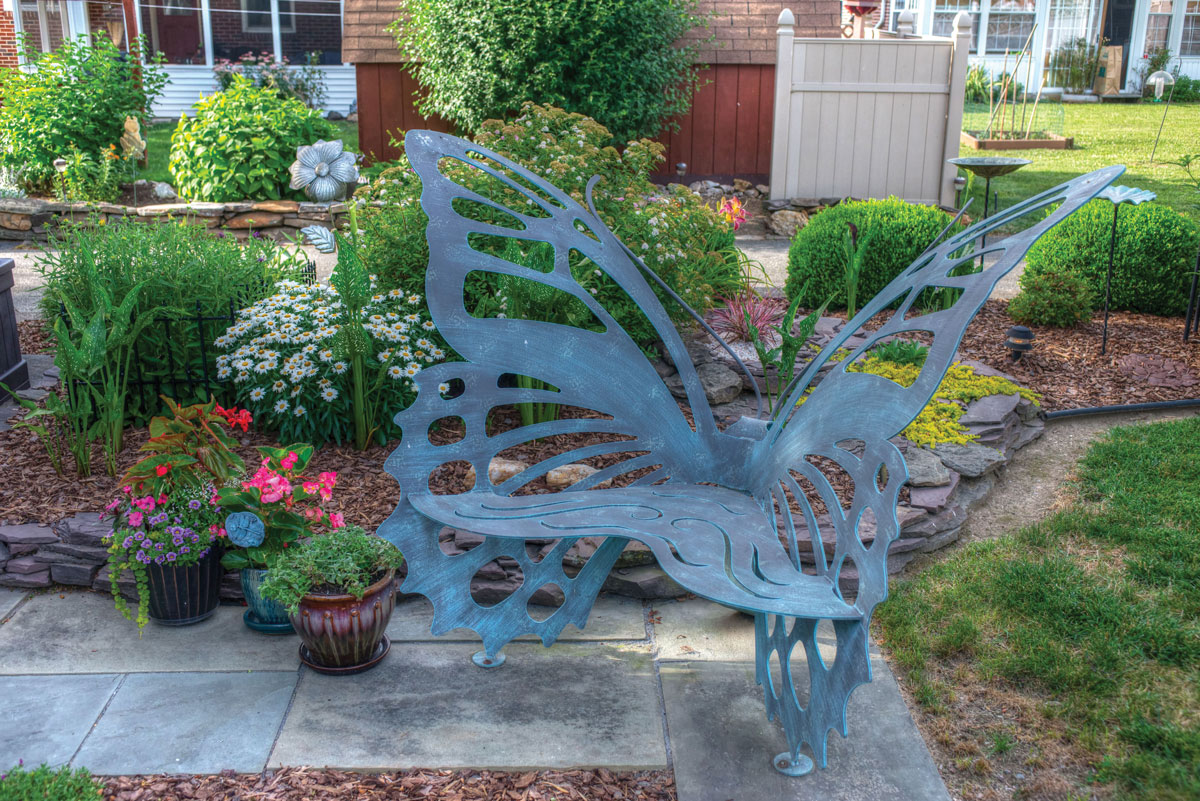 Kathy saw this bench in Key West, traced its manufacturer to a company in North Carolina, and ordered one for her garden.

While the backyard was always entertaining-friendly, Kathy saw an opportunity to take it up a notch when the large, above-ground, never-used pool began leaking in 2007. Kathy had it removed and began contemplating what she would do with the round footprint  the pool left behind. Figuring it would be nearly impossible to remove the sand from the footprint, she decided to take advantage of the situation and install a patio.

The next phase of the backyard makeover transpired 10 years later and included a deck that features a bar and outdoor kitchen (stove, grill and fridge). The final element was the pergola that shelters a dining table. Lighting throughout the area enables them to use the backyard well after dark. 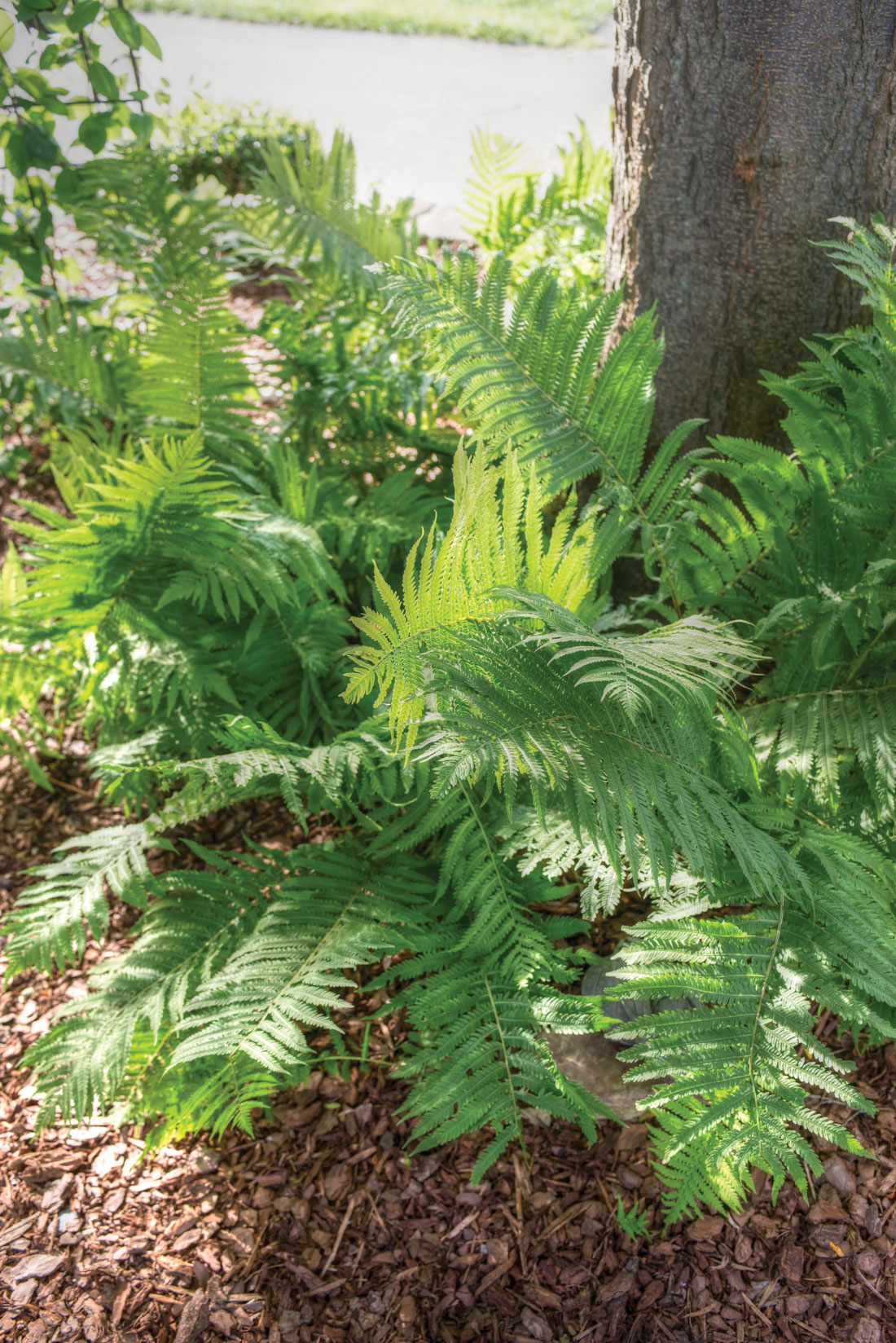 The ferns were gifted to the Hohenadels by their neighbors who operated Kloidt’s Flower Shoppe in Columbia.

As for floral displays, the selection covers the gamut. “We have color for a lot of the year,” Kathy says. Spring awakens with tulips, daffodils and azaleas. In the summer, clematis, daylilies, daisies, coral bells, crocosmia, calla lilies and the roses provide a spectrum of color. The ferns on the property are courtesy of former neighbors who owned Kloidt’s Flower Shoppe in Columbia. 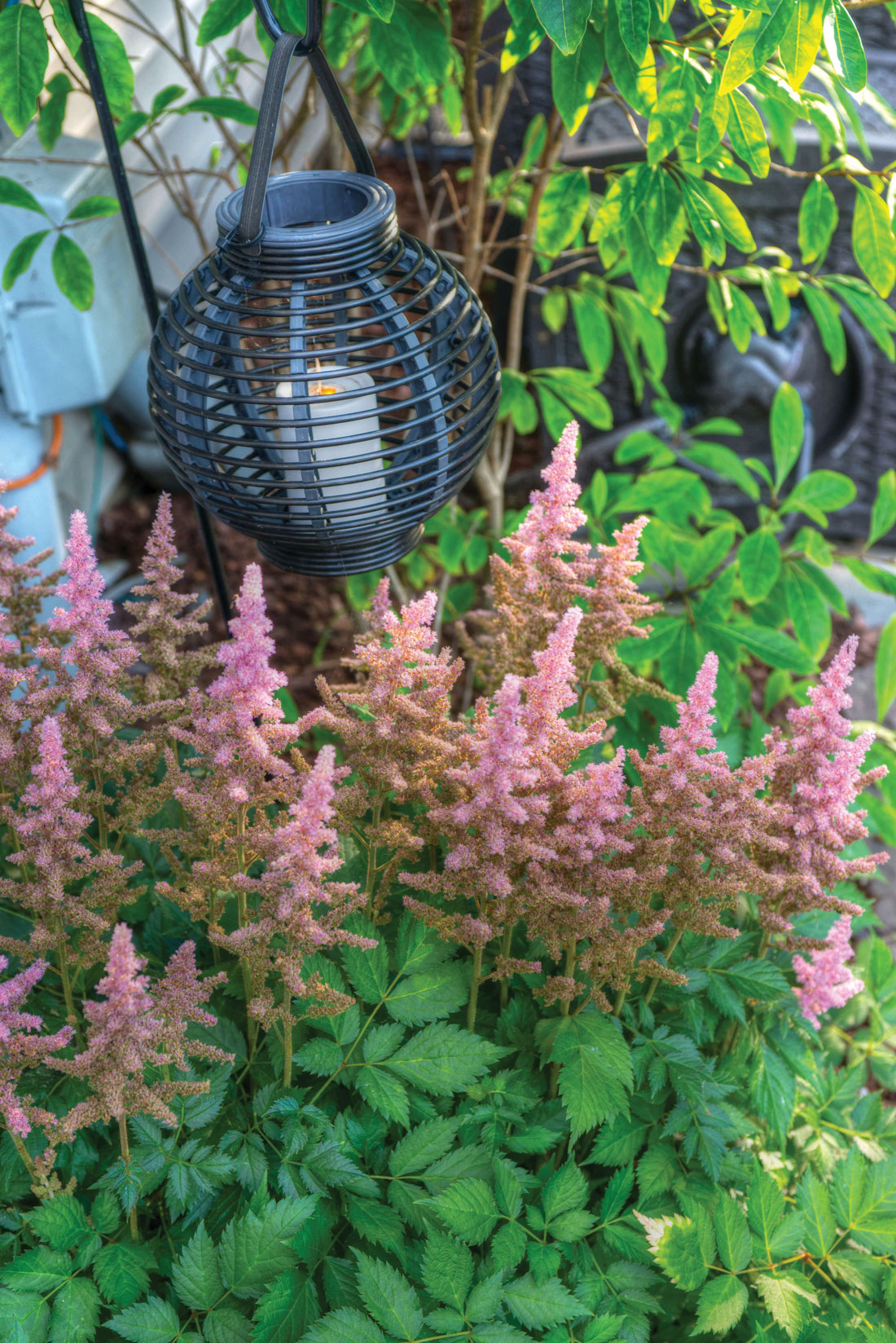 Asilbe provides color and texture in May and June.

Birds and butterflies flutter about the gardens. Kathy’s love of butterflies is evidenced in a butterfly-shaped bench she spied at the Key West Butterfly & Nature Conservancy. She traced its maker to Cricket Forge, North Carolina, and ordered one.

Container gardens also abound. “We take pictures of all the containers,” Vickie notes, explaining the pictures aid in replicating the plants and placing the finished containers in their proper spots the following year. Two ponds – both of which the sisters installed – add to the ambiance of the backyard. 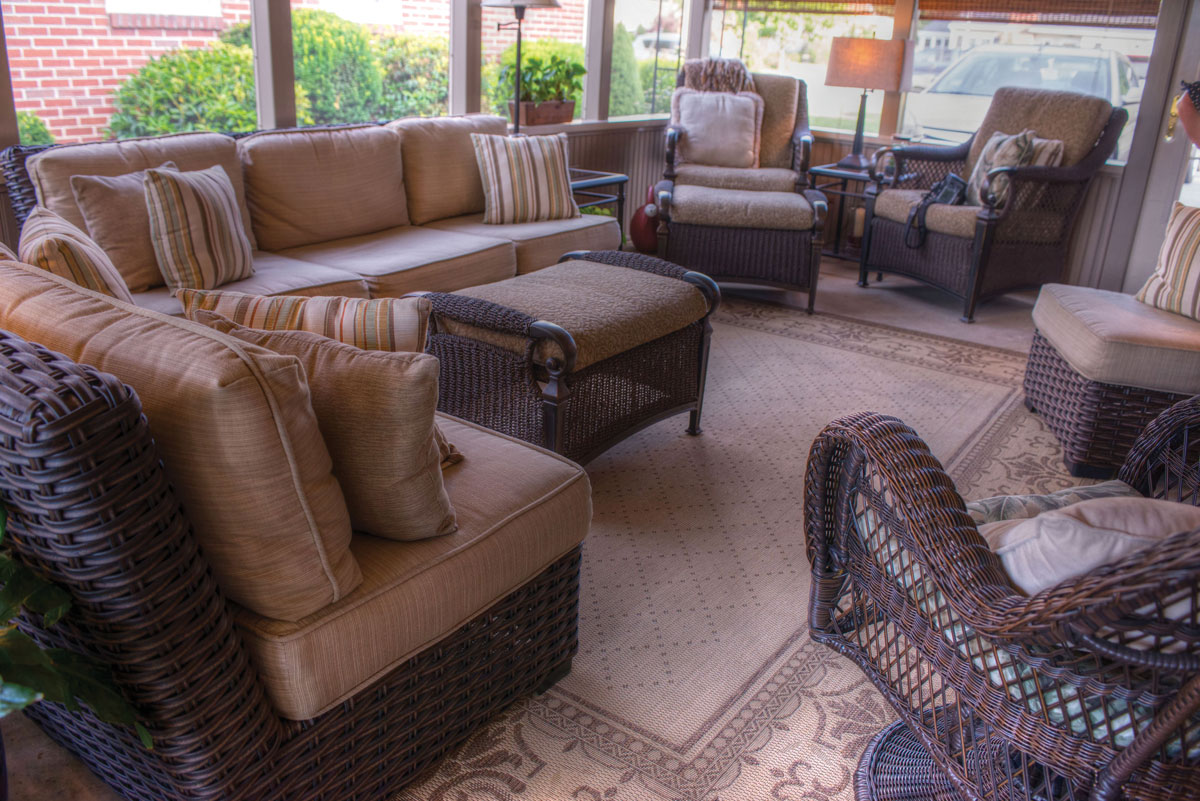 If they aren’t in the backyard, you’ll probably find Kathy and Vickie in their fully furnished (including television) screened porch. Their father made the dining table and when the Formica top began to deteriorate, the sisters gave it a new look with tile and wood trim.

The two are hands-on – Kathy takes care of the mowing, while Vickie tends to the trimming. Both help to spread the 40 bags of mulch that are needed for all the beds.

Despite the passage of time, it seems as if not much has changed at the Hohenadel residence. “We spend a lot of time outdoors,” Kathy says of the warm-weather months. “If we’re not on the screened porch, we’re probably in the backyard.” Vickie adds that even in October, you’ll find her on the porch wrapped in blankets. 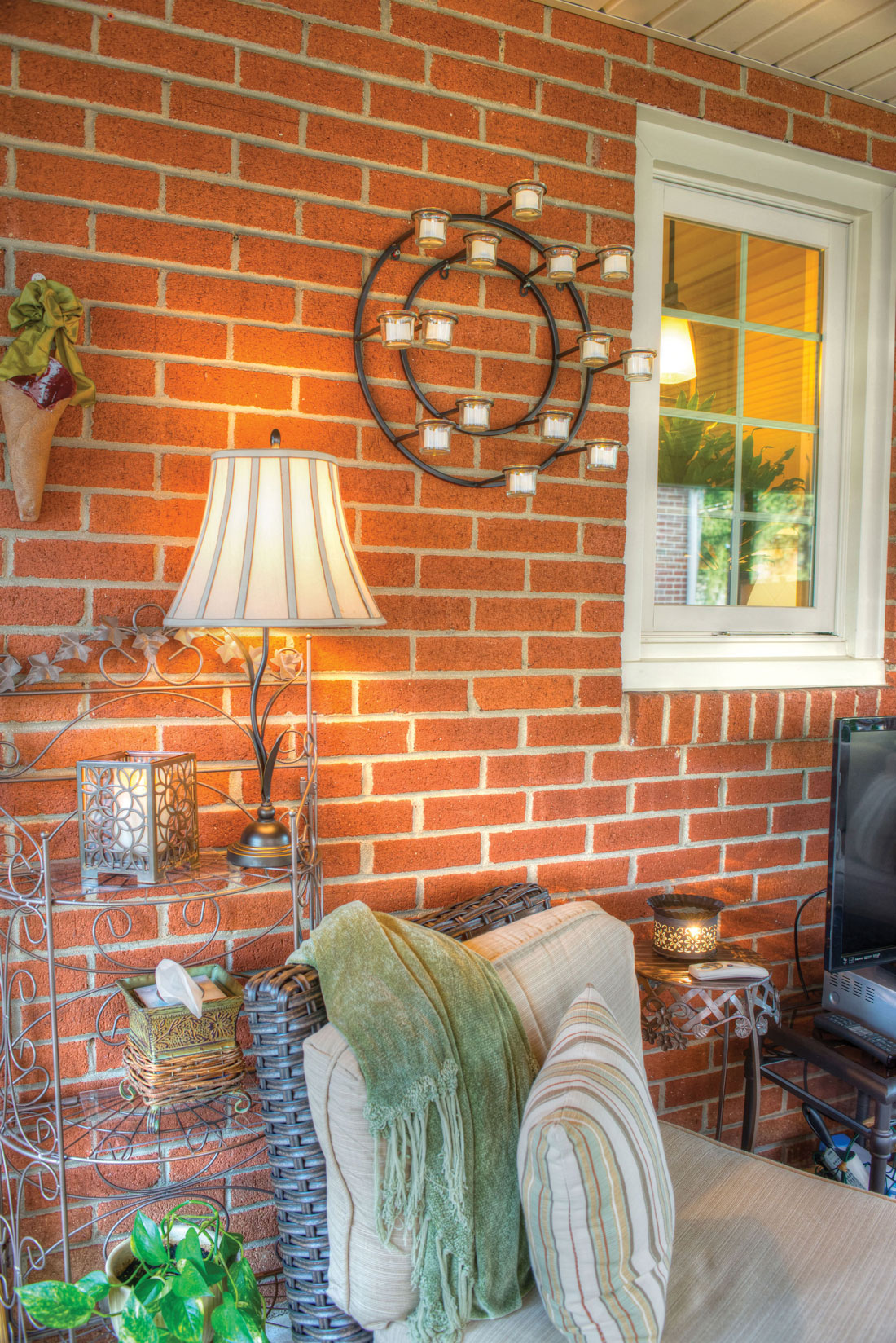 Art in the Gardens Tour

Columbia is filled with interesting gardens that offer a palette of styles. Once again, they will also be filled with artists and musicians sharing their talents. Tickets/guidebooks can be purchased at Columbia Crossing (41 Walnut St.) on the day of the tour. Proceeds benefit Create Columbia. For more information, visit facebook.com/createcolumbia.

A covered pergola, which the sisters put together themselves, provides space for outdoor dining.