Shelter in place, no school, social distancing, quarantine, non-essential workplaces. Such phrases have become part of our vocabulary because of the coronavirus. By now, you’ve probably watched your fill of television and movies, flown through recorded programming, baked a gazillion cupcakes and walked the dog a million times. It’s time to take a trip … via cyberspace.

I’ll never forget the view from atop the spire of One World Trade Center. I still find it impossible to describe what it was like to see the entire city of New York expanding for miles in every direction. I was fortunate to experience this sight through the efforts of a Time Magazine crew, whose members spent hours scaling the largest building in the western hemisphere with equipment designed to capture what’s known as a Gigapano, an interactive, high-quality, 360-degree panoramic photo.

I vividly remember seeing the resulting Gigapano for the first time. I spent at least an hour panning and zooming in on various buildings and bridges from all five boroughs. I was captivated by the way this photograph can seemingly transport the viewer to a place you wouldn’t normally be permitted to go.

While panoramic photography dates back to the 1800s, there have been unprecedented developments in 360 photography over the last decade. Unfortunately, the cost of producing these high-quality photos and crafting them into professional virtual tours is still quite expensive. As such, it is often viewed as a novelty by many businesses, particularly those working on a tight budget.

However, a new push for the technology has emerged in the wake of the coronavirus pandemic. As schools and businesses were shuttered, virtual tours came into the limelight as a way to defeat cabin fever and explore the world from home. 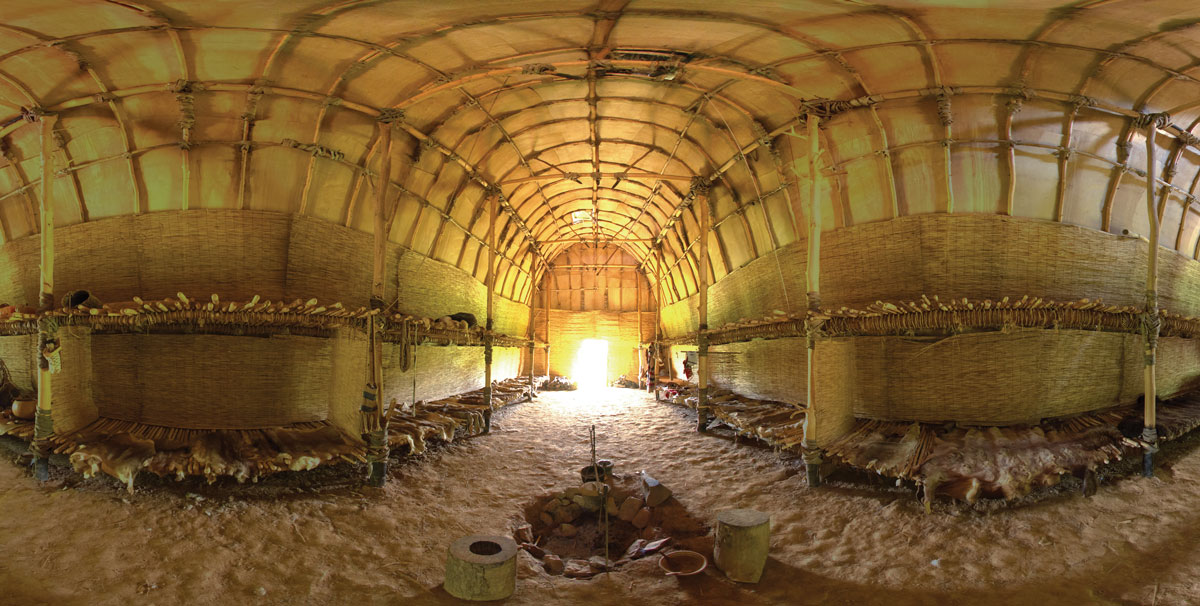 A panoramic photo from the Lancaster Longhouse at the Hans Herr House Museum in Willow Street.

You don’t need a global pandemic to dip your toes into Virtual Reality. It’s always a useful tool for the curious explorer. Currently, there is so much VR content available online that we can barely scratch the surface here, but I’ll give you some good starting points.

Google’s Street View is by far the most infamous collection of 360 imagery available and it’s much more than its original name implies. Street View extends into buildings, allows you to roam the Pyramids of Giza, and even takes you deep underwater to the Great Barrier Reef. Some of the Street Views, such as ancient historical sites, are compiled into Treks – alongside other media – to create an even deeper interactive experience.

To explore Google Earth (earth.google.com), all you need to do is tap the Voyager icon to access a library of interactive experiences from around the globe. Additionally, these experiences sometimes connect to places associated with historic events like the fall of the Berlin Wall, while others showcase where certain types of animals can be found. There’s even a Where in the World is Carmen Sandiego mini-game that’s regularly updated with new clues to her whereabouts.

Finally, one of the most impressive collections can be found on the Google Arts & Culture website (artsandculture.google.com). This site hosts detailed collections of artwork and historical artifacts ranging from local museums such as LancasterHistory and the National Watch and Clock Museum in Columbia, to world-renowned museums like the Louvre in Paris, and thousands more.

A panoramic photo from the Lancaster Longhouse at the Hans Herr House Museum in Willow Street.