The tradition of dinner and a movie being a favorite night out is back. Zoetropolis in Downtown Lancaster offers both – plus locally distilled spirits – under one roof. Who knows … you might even catch a fleeting glimpse of a real star – Taylor Kinney of NBC’s Chicago Fire is an investor. 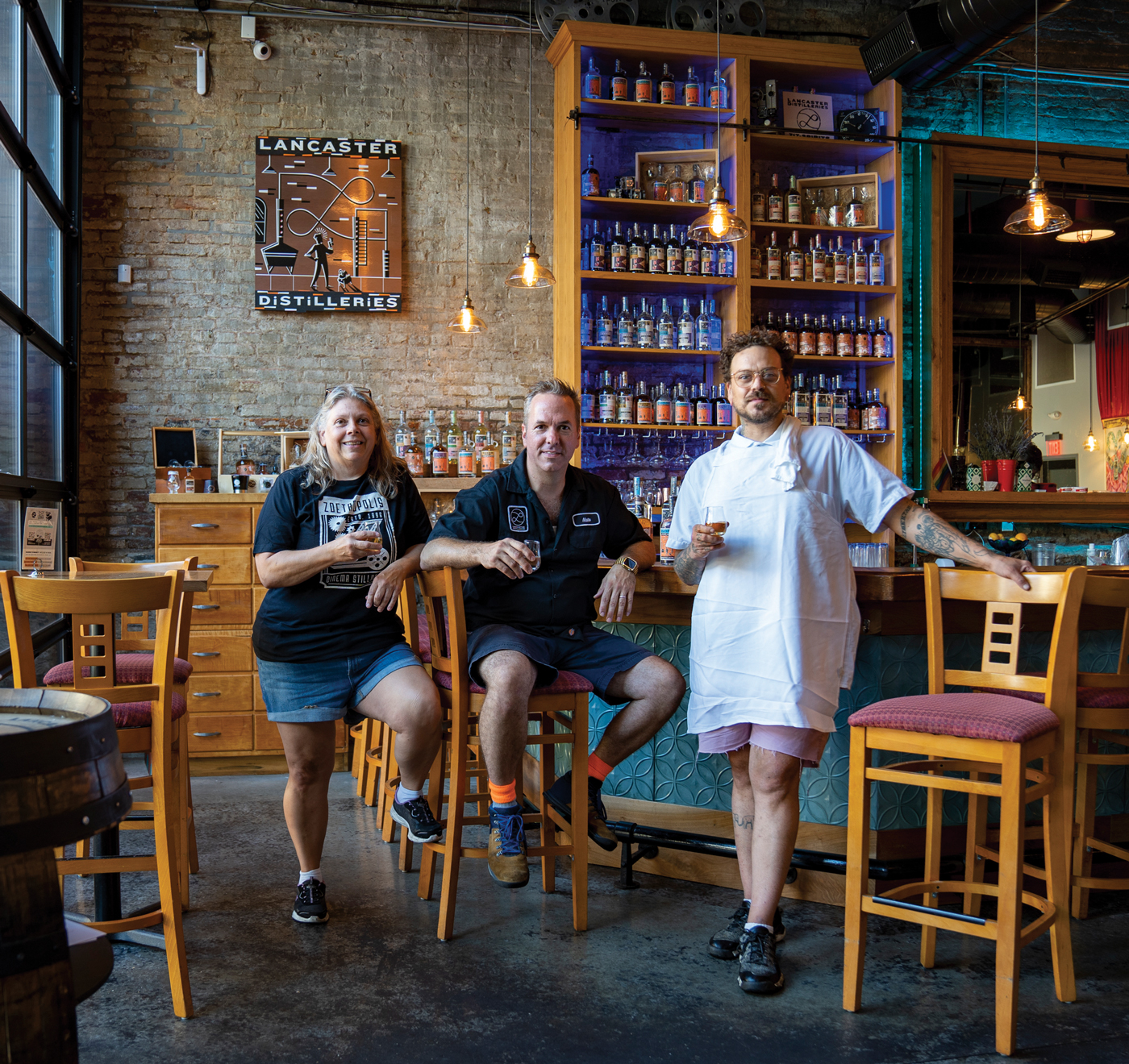 What was once a furniture store/warehouse on Water Street is now home to Zoetropolis, a restaurant, stillhouse and theatre complex. Left to right are general manager Karen DeVerter, partner Nate Boring and chef Russell Skiles.

The name Zoetropolis is derived from the word, “zoetrope,” the device that made still images appear to move in the early days of movies. The multi-faceted venue – restaurant, cinema and home to Lancaster Distilleries – has evolved since its founding as a small arthouse theater in the 1990s. Originally located on Lemon Street, it moved to James Street in 2014, and to its current location in 2018. The theatre, which was the first venue to open at the new location, continues to focus on independent and foreign films and documentaries, as well as live music and open-mic nights. The restaurant and distillery were added in 2019.

“This building is a lot closer to the heart of downtown, so it gets a lot of foot traffic. Zoetropolis is a destination for anyone who loves film, live music, food and libations,” says Nate Boring, one of Zoetropolis’ partners. “It’s a symbiotic relationship; you can come here and stay all day and have everything you need.” Other partners are founder Leigh Lindsay, Cheila Huettner, Matt Hostetter and Todd Smith. Actor Taylor Kinney is one of its investors. 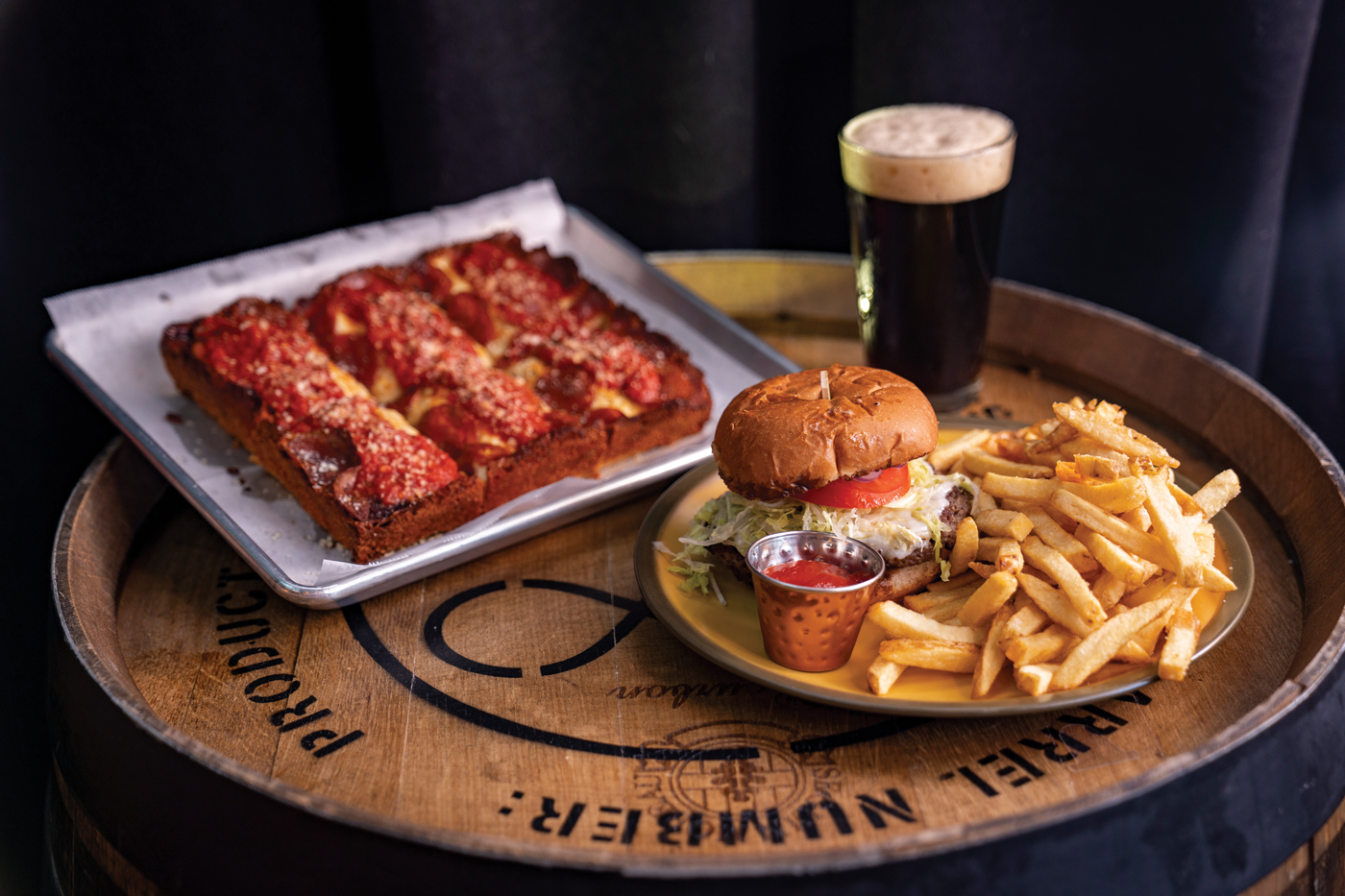 Zoetropolis is known for its Detroit-style pizza and burgers that are a blend of short rib, dry-aged chuck and brisket.

The restaurant is light-filled thanks to the window-filled, roll-up garage-type doors that open onto a patio. Inside, the walls are composed of exposed and painted brick; a view into Lancaster Distilleries’ distilling area is also provided. Seating can be found at the large bar that nearly fills one wall and a variety of tables.

Chef Russell Skiles joined Zoetropolis last fall. He describes the menu as casual American fare with some contemporary twists. “Over the years, without thinking about it, I’ve developed my own culinary voice as I’ve found the food that satisfies me. I love supporting local farms and using hyper-local ingredients,” he explains. “I like to eat fresh and sustainable things, so I cook that way.” The chef is also a fan of foraging. “I’m into foraging for wild edible foods. I’ve foraged wild fruits and herbs to use in the restaurant. Part of foraging is being a steward of the land,” Russell says. 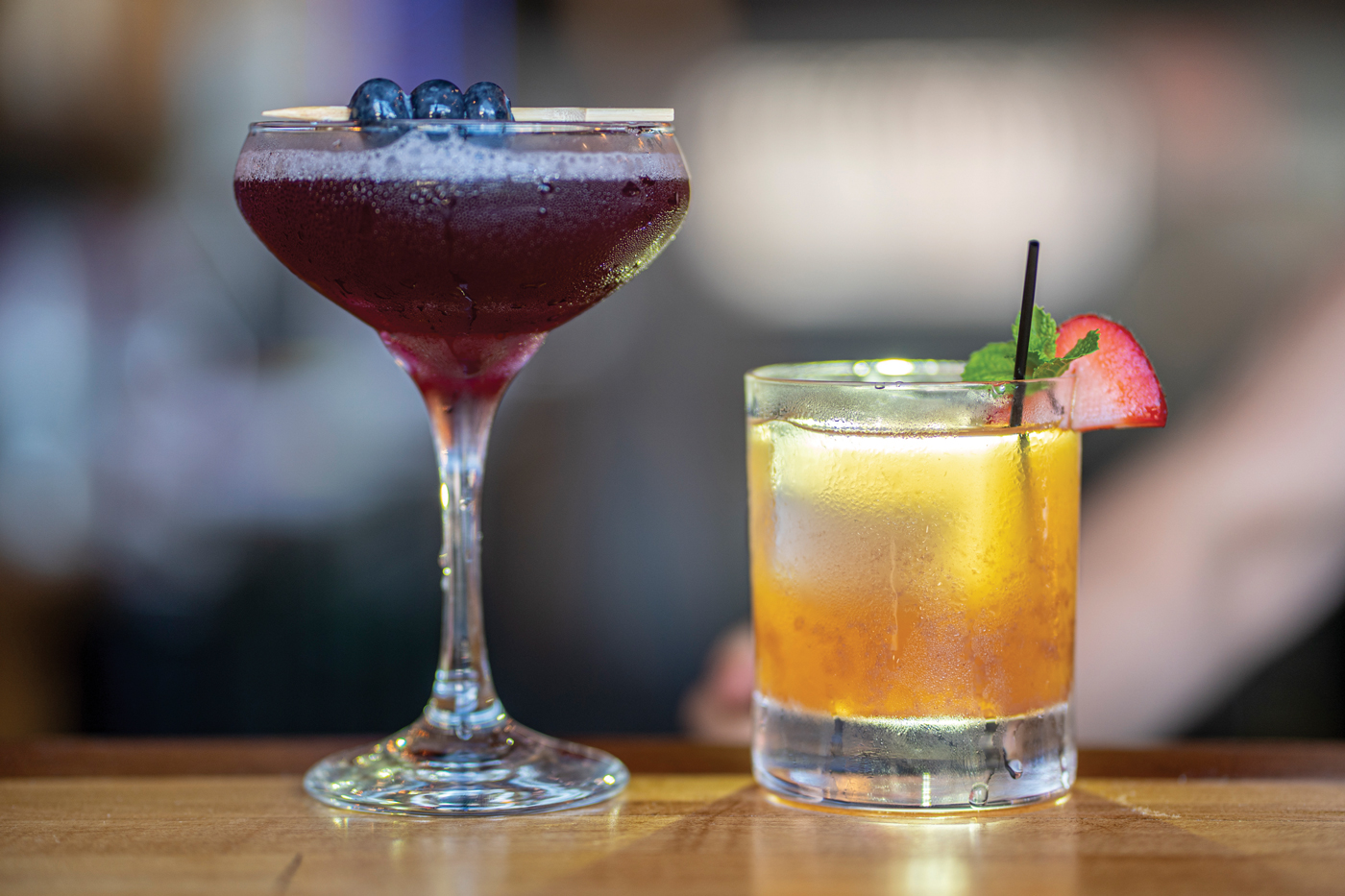 Spirits from Lancaster Distilleries are used to create Zoetropolis’ cocktails.

“Shop Local” is also part of his mantra. Nearly all the vegetables are sourced from local farms. Russell says some of the farms have stands at nearby Central Market, while others are found throughout the region, including Fifth Month Farm in Mount Joy; Brogue Hydroponics in Brogue, York County, and Field’s Edge Research Farm in Lititz. Eggs are procured from pasture-raised poultry at Horse Shoe Ranch in Pottstown. Rolls come from Alfred & Sam’s Italian Bakery in Lancaster, and unleavened and sourdough breads are sourced from Front Porch Baking Co. in Millersville. 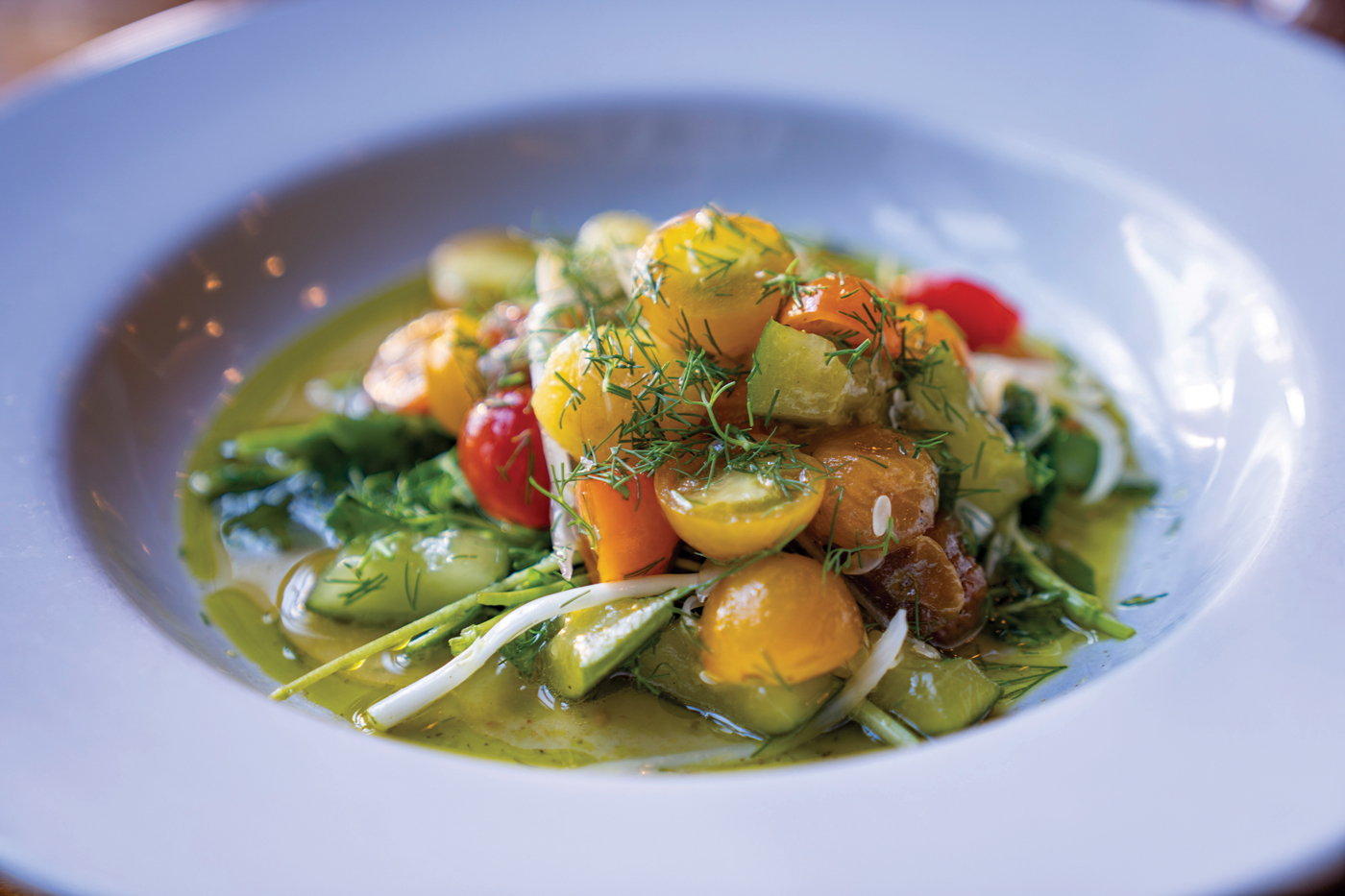 Detroit-style pizza is a popular menu item. Chef Russell’s high-hydration, square-pan pizza is available with a variety of toppings. “High hydration means a lot of water is used in the dough – that makes the crust light and airy,” he elaborates. “We place cheese on the bottom and spread it all the way to the edges, so it crisps on the edges when it’s baked. Then the sauce goes on the top. Detroit-style pizza is trending in bigger cities like Philadelphia right now. We were the ones who introduced it here.”

Burgers, which are made with a blend of short rib, dry-aged chuck and brisket, are also top-sellers. “We use Cooper Sharp cheese since it melts really well and has a great flavor. Lettuce, tomato, onion and our special sauce are then added. Then, we serve it on a soft roll,” he explains. 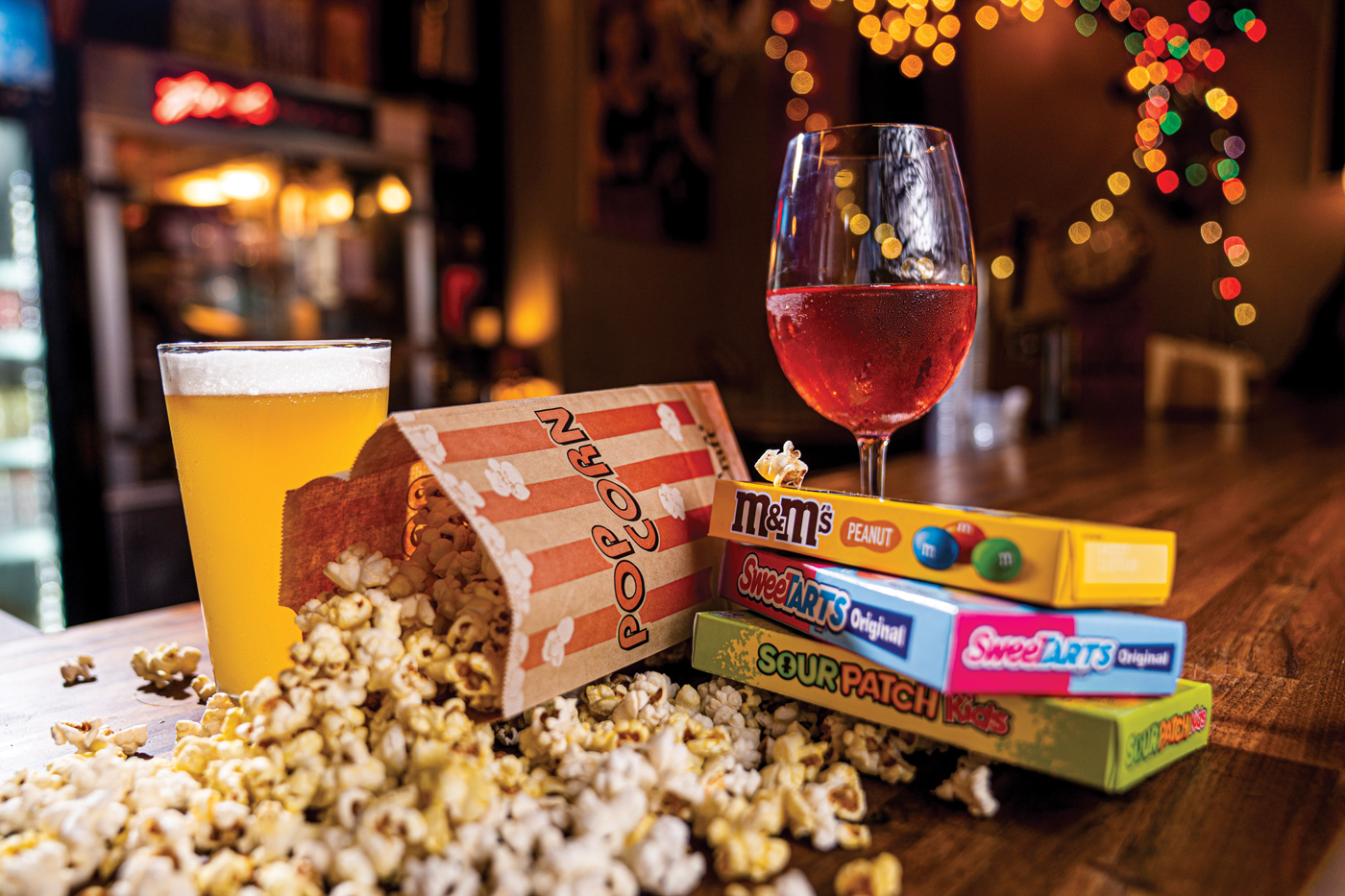 The theatre’s snack counter offers everything from popcorn and candy to beer and wine.

Vegan and gluten-free options are available including vegan chili and a vegan burger that’s served with vegan cheese. Gluten-free rolls are available upon request. Additionally, since menu items are made-to-order, most can be made gluten-free, vegan or to accommodate other dietary needs by switching out a few ingredients.

“We’re a home for everybody,” Nate says of the diverse menu. 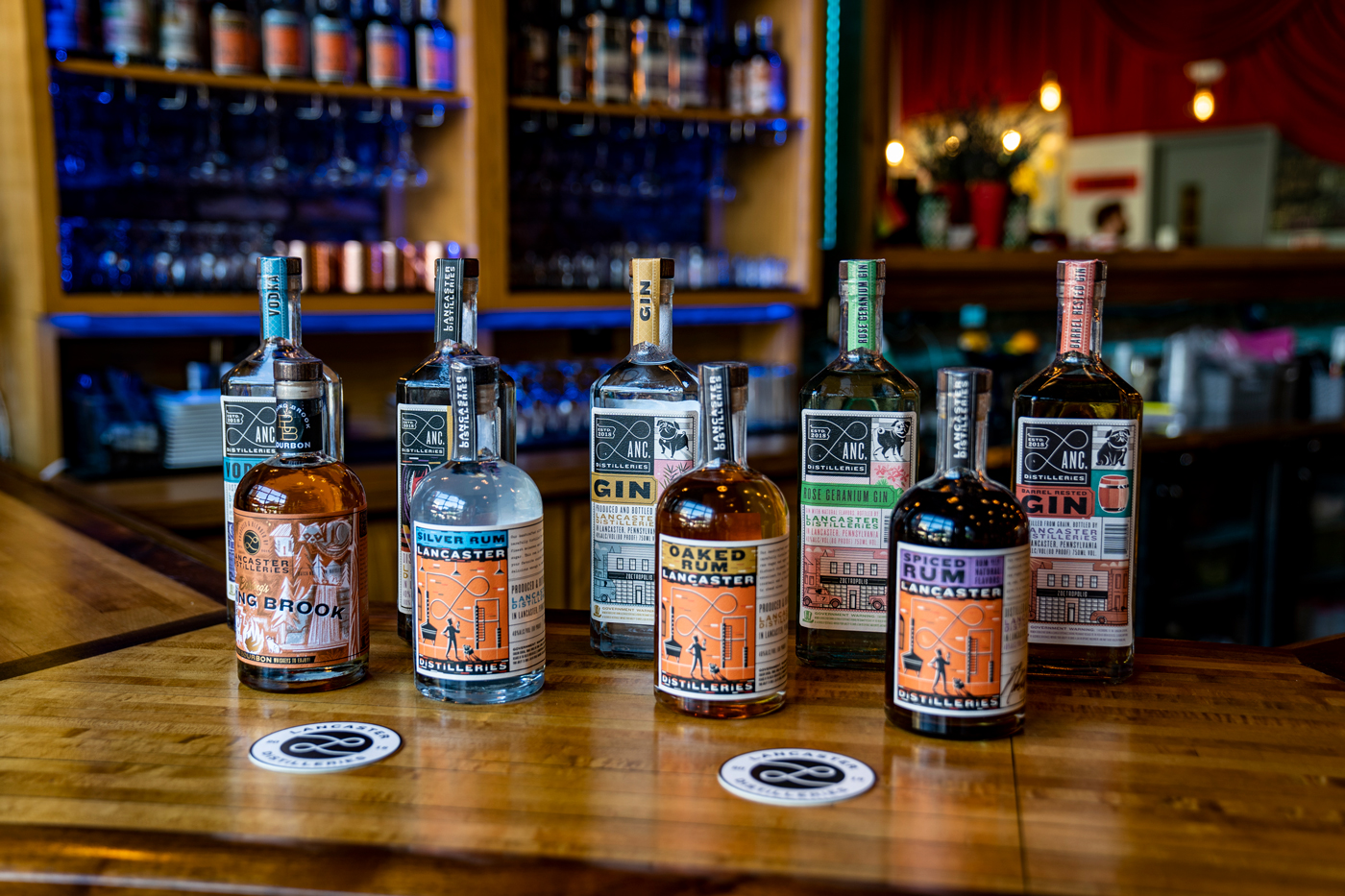 Lancaster Distilleries combines Nate’s passion for craftsmanship and his love for distilled spirits. He serves as head distiller and proudly notes that many of the spirits have garnered awards. “We try to use as many locally sourced ingredients as we can. We’ve even used some herbs and fruit foraged by Russell to create spirits,” Nate says.

He adds that most of the spirits, which also include mixers and syrups, are crafted in small batches. Seasonal offerings include green walnut liqueur, Forager’s Special Paw Paw Brandy and an apple brandy crafted with Pennsylvania-grown apples.

Lancaster Distilleries’ products are also available at select Fine Wine & Spirits stores in the county and can also be purchased at Central Market, Green Dragon and Adams County farmers markets. Delivery is available within a 10-mile radius of the distillery. 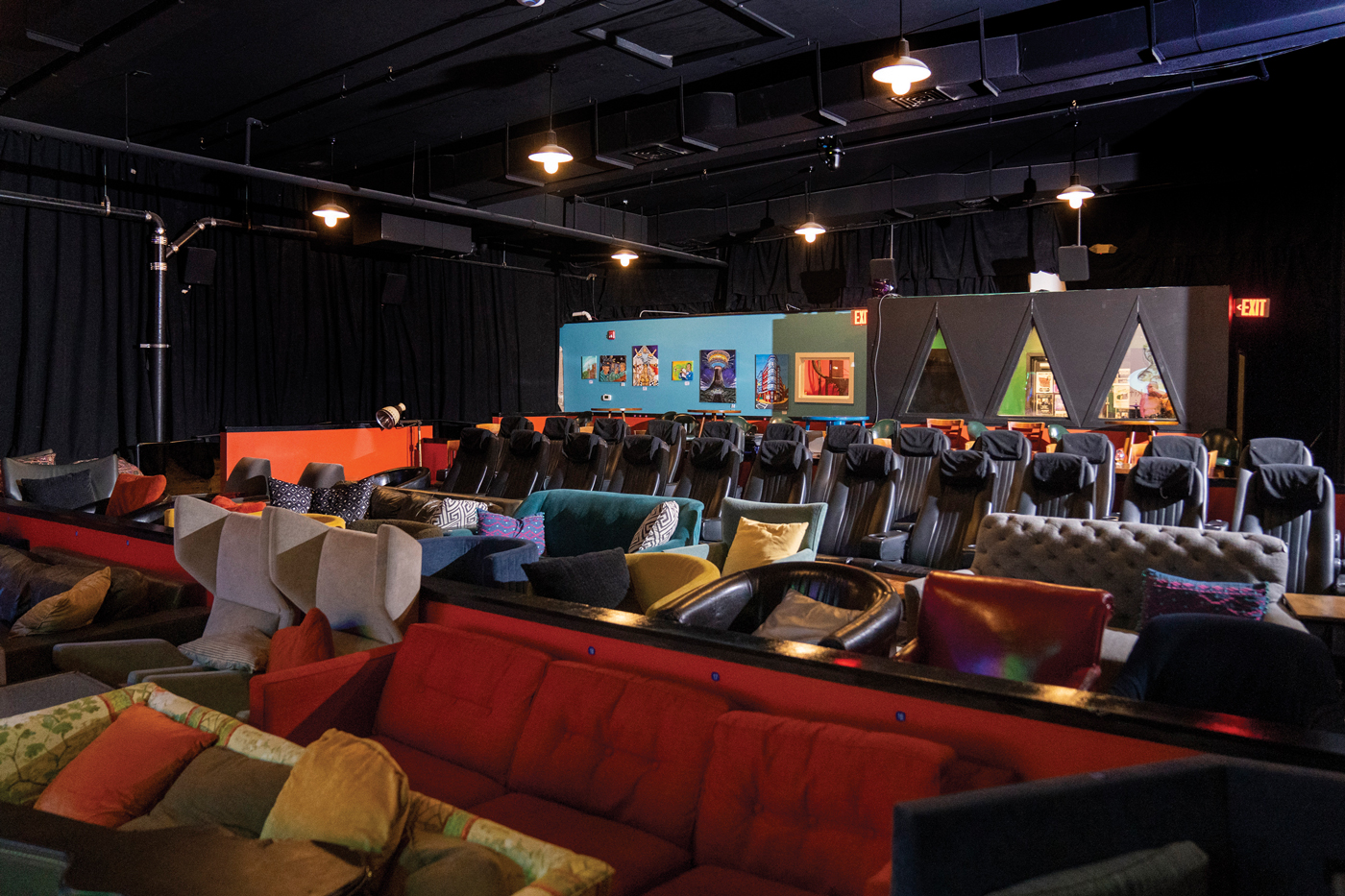 The theatre’s seating is a mix of upholstered pieces, traditional chairs and tables.

As for the theatre, it’s somewhat akin to watching a movie in your living room, as the seating includes upholstered chairs and sofas, as well as tables and traditional seating. Food and beverages are available in the lobby. For First Friday Fright (presented by Mike and Colleen Madrigale of Mr. Suit Records), films of a frightening nature are screened. Each month, the Philosophy-Drink-Film Series features a movie, a specialty cocktail and a discussion led by York College professor, Dennis Weiss. (September’s movie is Vertigo, while October’s is Psycho.) Revival Mondays feature both modern-day and cult classics, with weirdness being the theme. There’s also an Animated Film Series, as well as one named in honor of one of their bartenders/managers, Carl, with the theme of the films being “cool” and “crowd-pleasing.”

Zoetropolis will also play a role in two upcoming film festivals. The Gleaners Film Festival (September 22-24) is a community-based event that features non-normative and marginal works, which will be held at Winters Visual Arts Center at F&M and at Zoetropolis. The headliner is John Waters, the director of cult classics, Pink Flamingos and Hairspray (for details, visit gleaners.site). Zoetropolis will also be one of the five hosts for the Red Rose Film Festival, which features the work of international filmmakers. It kicks off September 1 and will culminate October 15 with an awards ceremony (visit redrosefilmfestival.com for details).

What was once a furniture store/warehouse on Water Street is now home to Zoetropolis, a restaurant, stillhouse and theatre complex. Left to right are general manager Karen DeVerter, partner Nate Boring and chef Russell Skiles.