Clay cooking vessels are the original crockpot – since the dawn of time, they have been used to prepare food. Like so many traditions, the clay cooker is an example of old becoming new again for a new generation of foodies. Clay cookers are a modern-day rediscovery! 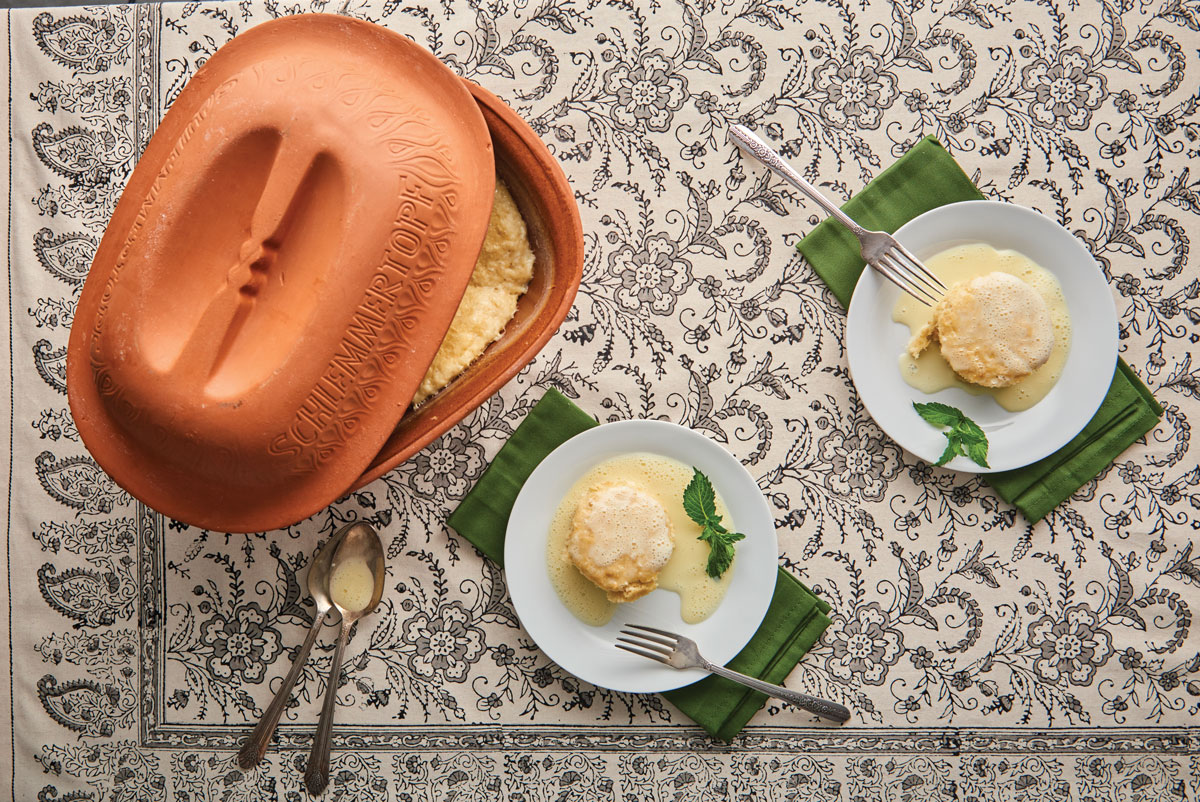 Steamed Bavarian dumplings and vanilla sauce with an aromatic garnish of home-grown mint.
The tablecloth that serves as the backdrop is from Sustainable Threads, a fair trade, eco-focused company that champions the Indian artisans who hand-paint the linens using wooden blocks. Source: Zest! in Lititz.

The Inside Skinny on Clay Cookers

In the 1970s, clay cookers imported from Germany – namely, the Westerwald “Potter’s Country” region – were all the rage in the United States, only to be replaced by the next big trend. They’ve been languishing in the back of kitchen cabinets, awaiting the moment they could once again demonstrate their myriad of abilities. Now, at a time when we are spending more time in our kitchens, the clay cooker’s time has arrived. Evidence of that is seen in food magazines – over the past year they’ve been touting the clay cooker’s ease and ability to multitask.

Similar to a crockpot or Dutch oven, part of the clay cooker’s appeal is that there’s little hassle in preparing a complete meal. Assemble your ingredients, soak the cooker in water, throw it in the the oven and an hour or so later, dinner is ready. 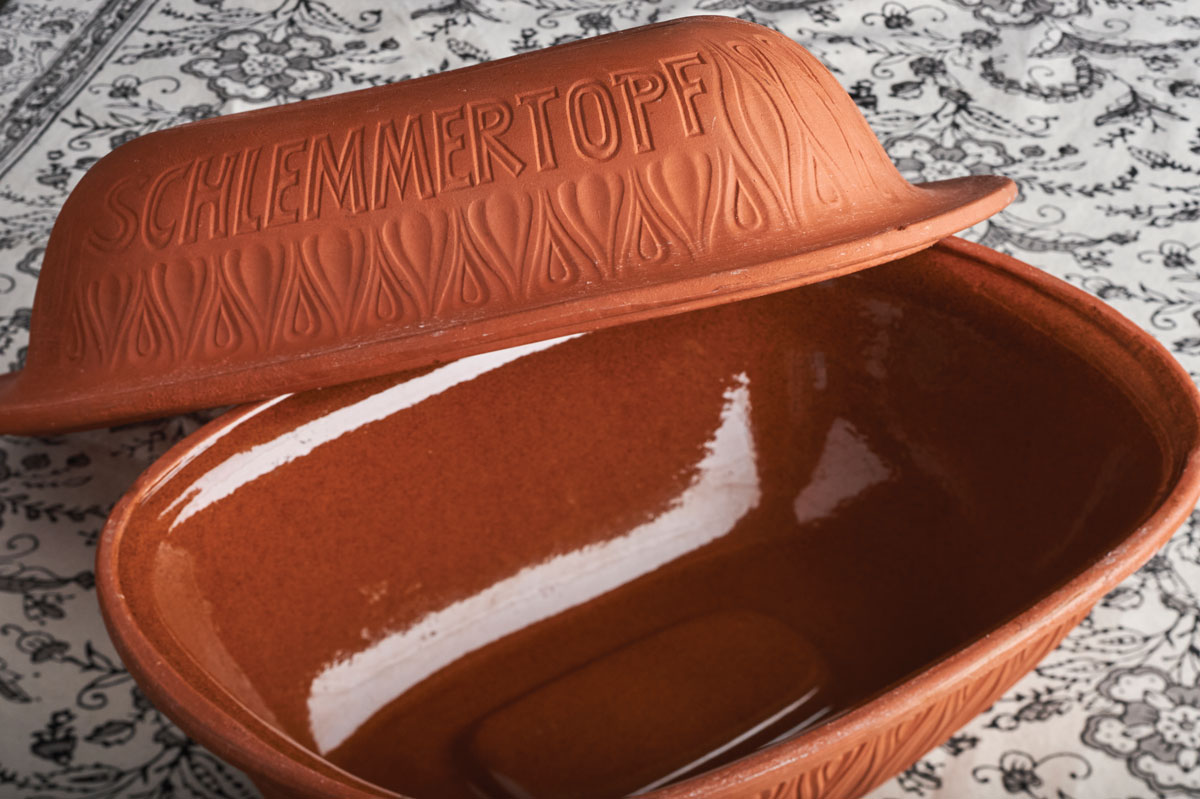 A vintage three-quart, small oval Schlemmertopf glazed clay cooker, model number 832. Popular in the 1970s, German-made Schlemmertopf and Römertopf clay cookers are still available today via sources such as Williams Sonoma, Amazon, Wayfair, eBay and other retail stores and online sites. In English, “topf” translates to “pot,” with “Schlemmer” meaning “gourmet,” and “Römer” meaning “Roman.”
How did I score this Schlemmertopf? When editor Sue Long worked in Washington, D.C. back in the 70s, her boss’s wife co-owned an import business, which, at the time, was the exclusive distributor of Römertopf/Schlemmertopf products in the United States. Over the course of several Christmases, the staff received clay cookers and wine chillers as gifts. “They’re perfect for people who don’t like to cook,” Sue says. “They’re really forgiving – you can’t make a mistake.”

While the exterior of the Schlemmertopf (the cooker I used) is composed of bare terra cotta, the interior is glazed as an effective non-stick measure. Because they can braise food in a small amount of liquid, clay cookers are also given kudos for their ability to cook healthy food while retaining nutrients and moisture.
Since the lid is soaked in water before use, a blanket of steam is created that cooks food from above, a rapid convection heat transfer. Like the container itself, steaming is a delicate cooking process that preserves more nutrients such as vitamins B and C.

Functionally, clay is porous and the lid is not airtight, allowing vapor to escape to manage pressure while retaining a concentration of flavors. Surrounded by moisture, food will not burn, adding to its ease of use.

As for multitasking, a clay cooker can be used to prepare a chicken, a roast, stews, casseroles, chili, bread and desserts. 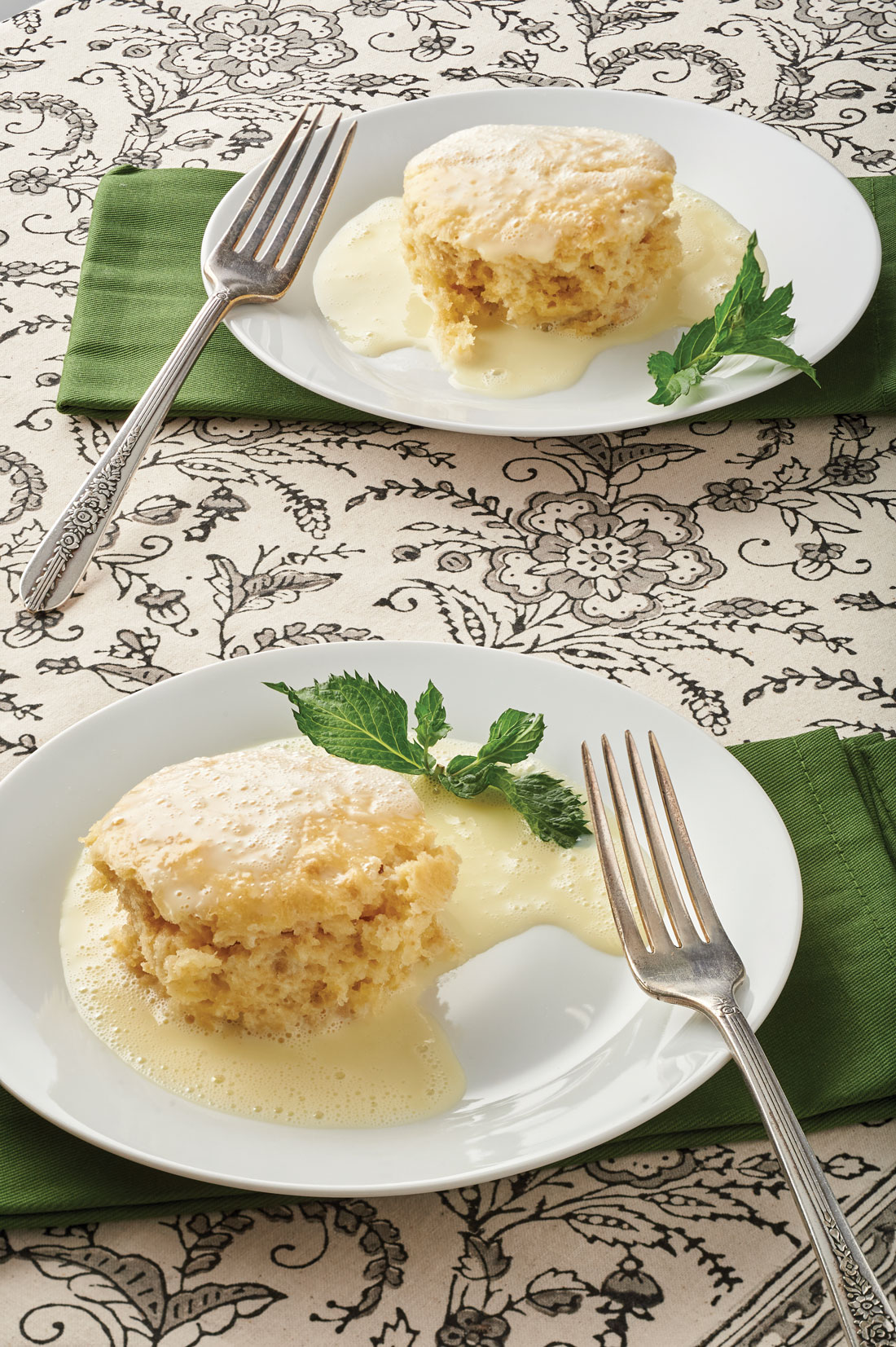 Dessert is Our New Dinner

Because summer has been such a scorcher, I’m constantly looking for ways to stay cool. Keeping the kitchen cool has also been a goal. Predictably, because of  COVID-19, we haven’t had many dinner guests at our house over the last few months. On the rare occasion that we do have guests, dessert on the deck has become the new dinner. (Ice cream has become a staple and so, too, is finding ways to dress it up.) 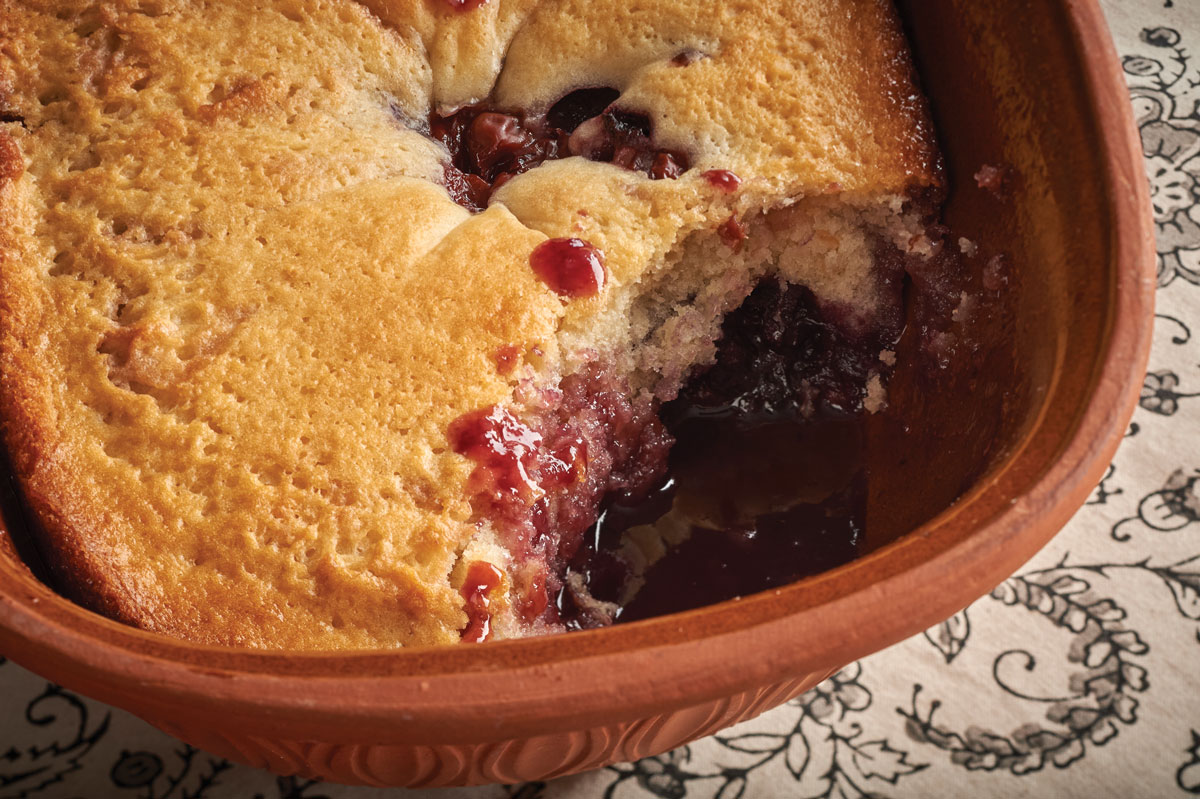 While any of the local bakers in my part of the county could identify me in a lineup, baking is my least favorite task in the kitchen. Compared to cooking, I find baking to be unforgiving, rigid and worst of all, once the process begins, there’s little to do in the way of course corrections.The benefits of a clay cooker stood out to me as a way of leveling the playing field. The steam produced by a soaked clay lid ensures the top of baked goods will be spongy. Surrounded by clay, bakes should be even – thanks to conduction, steam and being able to better handle fluctuations in oven temperatures. The porous quality of the clay retains less heat than a denser material that might cause it to burn. Not being able to see what’s happening underneath the lid forces me to trust the timer and keep the oven door closed, thereby retaining heat.

Resolved to accomplish better baking, I decided to put a clay cooker to the test.

I started by weighing the advantages of a clay cooker against the types of baked goods that were most likely to succeed. Bavarian dumplings seemed an obvious dessert to attempt, taking advantage of the steam-producing lid. Milk and butter were added to the clay cooker, followed by risen dough, 90 minutes, that was rolled and soaked in the milk bath for 30 additional minutes before the clay cooker was placed into a cold oven. (Not having to pre-set the oven is another advantage in helping the kitchen stay cool.)

Fifty minutes later (in a 350-degree oven), the dumplings came out buttery and rich, dense with milk and vanilla, having a lightly caramelized bottom crust.

On my first attempt, the dough rose so much that the dumplings practically baked together, so I cut them into biscuit shapes before drizzling them with the perfect pairing of vanilla sauce. For the sauce, start with 4 egg yolks and 1 cup of sugar whisked together until pale yellow. Bring 2 cups of milk to a boil, then slowly pour into the egg/sugar mix, whisking constantly. Return the mix to the saucepan over medium heat for a few minutes before removing and adding a teaspoon of vanilla extract. The sauce can be chilled or served warm. I suggest serving dumplings warm along with a cold glass of milk or iced coffee. 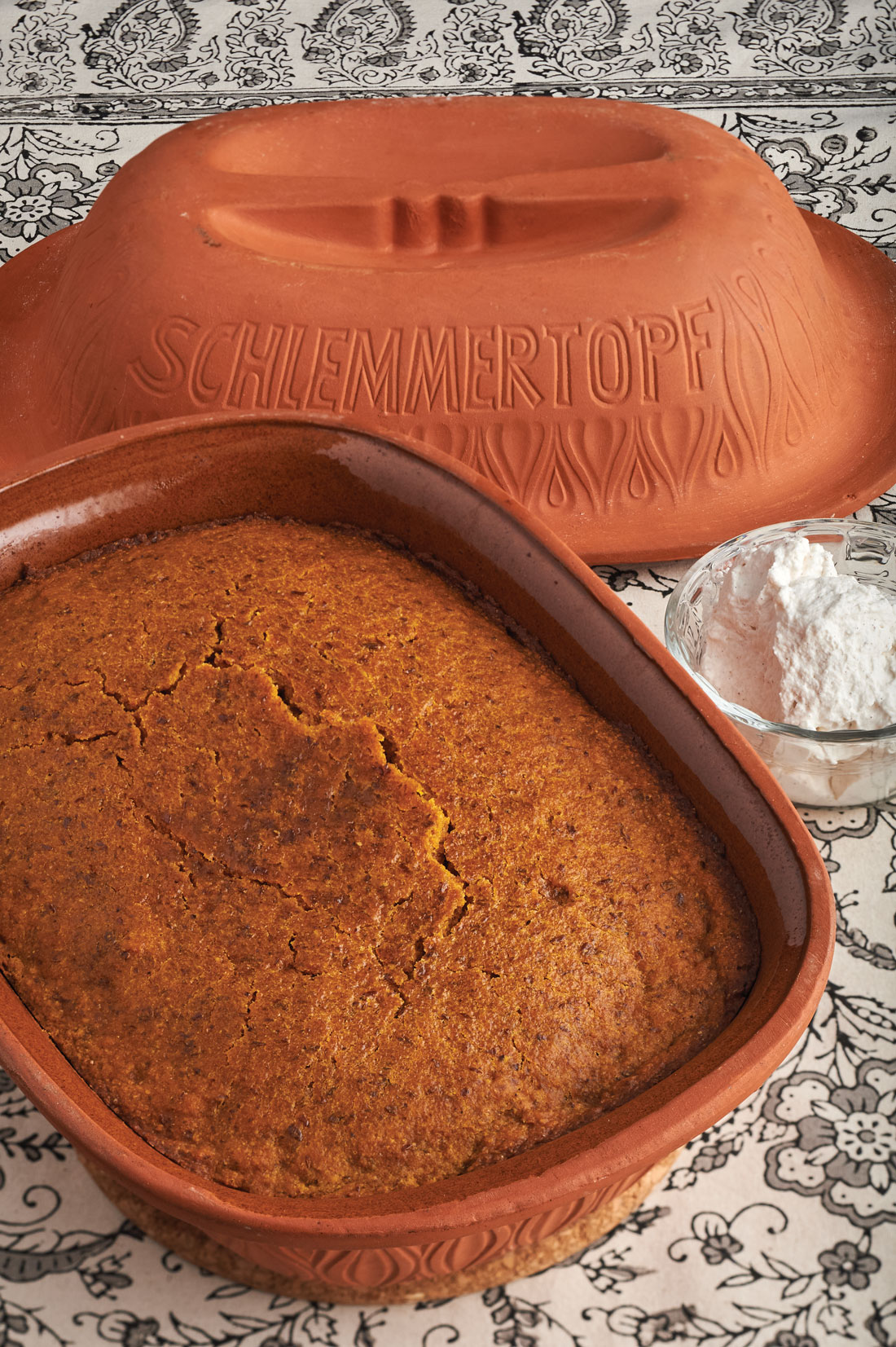 Pumpkin
bread baked with spelt and flaxseed meal with a side of chilled homemade cinnamon whipped cream.

Cherry pudding cake is an impressively simple recipe that’s as refreshing as it is delightful. I started with a recipe from Taste of Home and made a few modifications. Mix two 15 oz. cans of pitted cherries, drained. (I prefer mixing sweet and tart cherries, added to 1-1/2 cups sugar.) In a separate bowl, mix 2 cups of all-purpose flour, 1 cup of sugar, 4 tsp. of baking powder and 2 Tbsp. canola oil. Butter the glazed clay cooker, pour in the batter and then top with the cherry mix. Bake for 60 minutes at 400 degrees.

The crust turned out perfectly chewy (like a brownie), while the top was utterly decadent. The mix of sweet and tart cherries plays well and cooks into a jam-like consistency. Add cold milk or vanilla ice cream and you won’t believe you made this at home.

Baking loaves of bread is something I normally loathe, having experienced frequent failures over the years. With fall fast approaching, pumpkin bread seemed a fitting test of the clay cooker. I substituted spelt for wheat flour and flaxseed meal for wheat germ in my recipe. Aside from needing 90 minutes in the oven at 350 degrees for such a dense bake, the consistency and crust were perfect.

Chilled cinnamon whipped cream brings balance on a warm day and is easy to make at home: 1/2 pint of heavy cream whisked with 1 Tbsp. of confectioner’s sugar and a dash of vanilla. Stiff peaks form in a few minutes. Then, add ground cinnamon to taste for a step up in flavor. 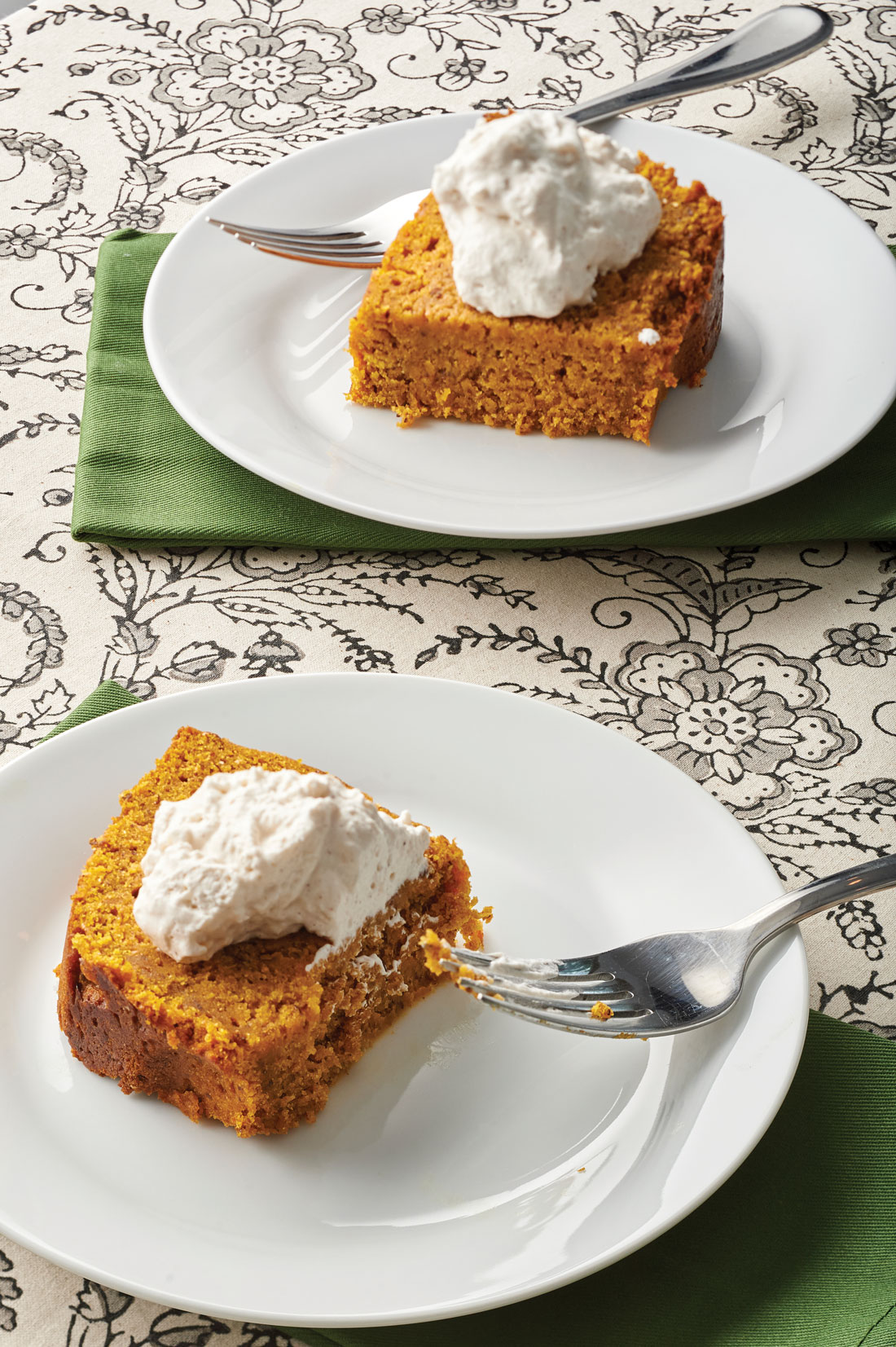 Whether you’re cooking or baking with clay, there are a few considerations that must be taken.