When I found out I’d be attending college in Lancaster, I was excited. I’d be coming from Massachusetts to Pennsylvania, a state I knew a fair amount about but had never had the chance to visit. Thoughts of Pennsylvania conjured images of the Liberty Bell, the Declaration of Independence, and figures like Benjamin Franklin, one of the namesakes of the college which I was soon to attend. Friends and family reminded me that what I was thinking of was more Philadelphia-centric, not the smaller town-like city I was soon to find myself in.

I moved into my dorm room and began to venture out into Lancaster City. I soon became acquainted with the usual haunts of local college students– Lyndon City Line Diner on the weekends, Oka Asian Fusion takeout while studying, and First Fridays at the beginning of each month. As another two years passed, I continued to try more and more restaurants and activities. Without a driver’s license and car, however, I was limited to the things I could reach by walking and had to rely on friends driving to the more out-of-the-way spots. Because of this limitation, I was missing out on fully experiencing the wealth of things Lancaster County has to offer beyond the confines of Lancaster City.

It was with excitement that I set out to explore the rest of the county with Briana Hess, the assistant editor of Lancaster County magazine and my chauffeur and tour guide for the day. We began by heading to Elizabethtown (which I now know can also be affectionately referred to as E-Town). Our first stop would be Masonic Village, a destination I regarded with ambivalence upon learning that it was, in fact, a retirement community. I was assured, however, that it was a must-see destination and resembled a castle.

Upon arriving, it quickly became apparent that Masonic Village was no ordinary retirement community. Spanning 1,400 acres with tall pines and a building which truly did look castle-like, the main building, an old-world style stone structure, overlooked a perfectly manicured garden and fountain. I was soon to learn that this estate began as the Masonic Homes of the Grand Lodge of Pennsylvania, a haven for aging freemasons and their spouses dating as far back as 1910, a history which accounted for the grandness of the property. 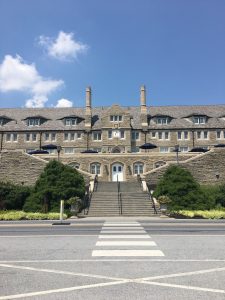 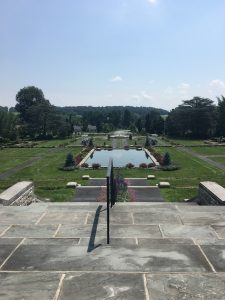 We next made our way through downtown Elizabethtown and past Elizabethtown College. Passing through the idyllic town, I was reminded of the New England towns I was familiar with growing up. The intimate feel of the area continued as we passed Elizabethtown College, surprising, considering how much newer the college appeared with its modern buildings. Nonetheless, the college fit in seamlessly, perhaps because of the abundance of greenery and gardens.

It was time to leave Elizabethtown, and we began our drive to Narvon, passing the fabled Blue Ball sign and well-reputed Shady Maple Smorgasbord along the way. This was the stop I was most excited for, having been told to expect a covered bridge. We arrived at Historic Poole Forge, and sure enough, there was the red covered bridge which I had so coveted. The fascination had begun a few months prior when I’d impulsively bought a painting of one at The Pottery Works and realized that it would be ridiculous to have lived in Lancaster for the better part of three years and not have seen one in person. 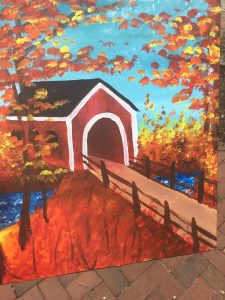 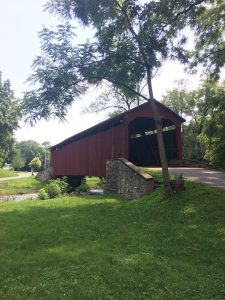 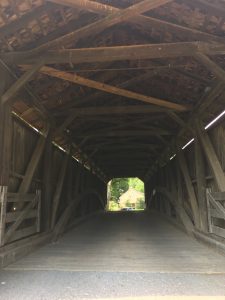 Before ending our day, we stopped by the Ephrata Cloister, a unique monastic settlement founded in 1732 by a man named Conrad Beissel, who believed life should be spent preparing for the Second Coming. I learned that a number of celibate men and women moved to the property to live a life of observance, moving about the grounds in white robes, eating little, sleeping less and praying often. I was additionally surprised to learn that William Penn had once counted himself a member of the Ephrata Cloister.

Having explored a number of new spots in Lancaster County, we began the drive back to Lancaster City, passing sweeping farms and bicycle-riding Amish. I watched through the window as we passed farm stands and fields full of cows and horses alongside rows of corn and tobacco plants (which I now knew to identify by their large leaves and yellow-green hue). This was the Lancaster of postcards, and I’m happy to be able to say that I’ve now thoroughly experienced it.