Lancaster County is filled with history at every corner. The land we live on has seen horrific massacres, wartime hospitals and tragic accidents. Some of these lives lost are said to still roam the county in their afterlife. In the spirit of Halloween, we’ve compiled some of Lancaster County’s most haunted places and fabled ghost stories for echoing at your spooky parties or late-night campfires. 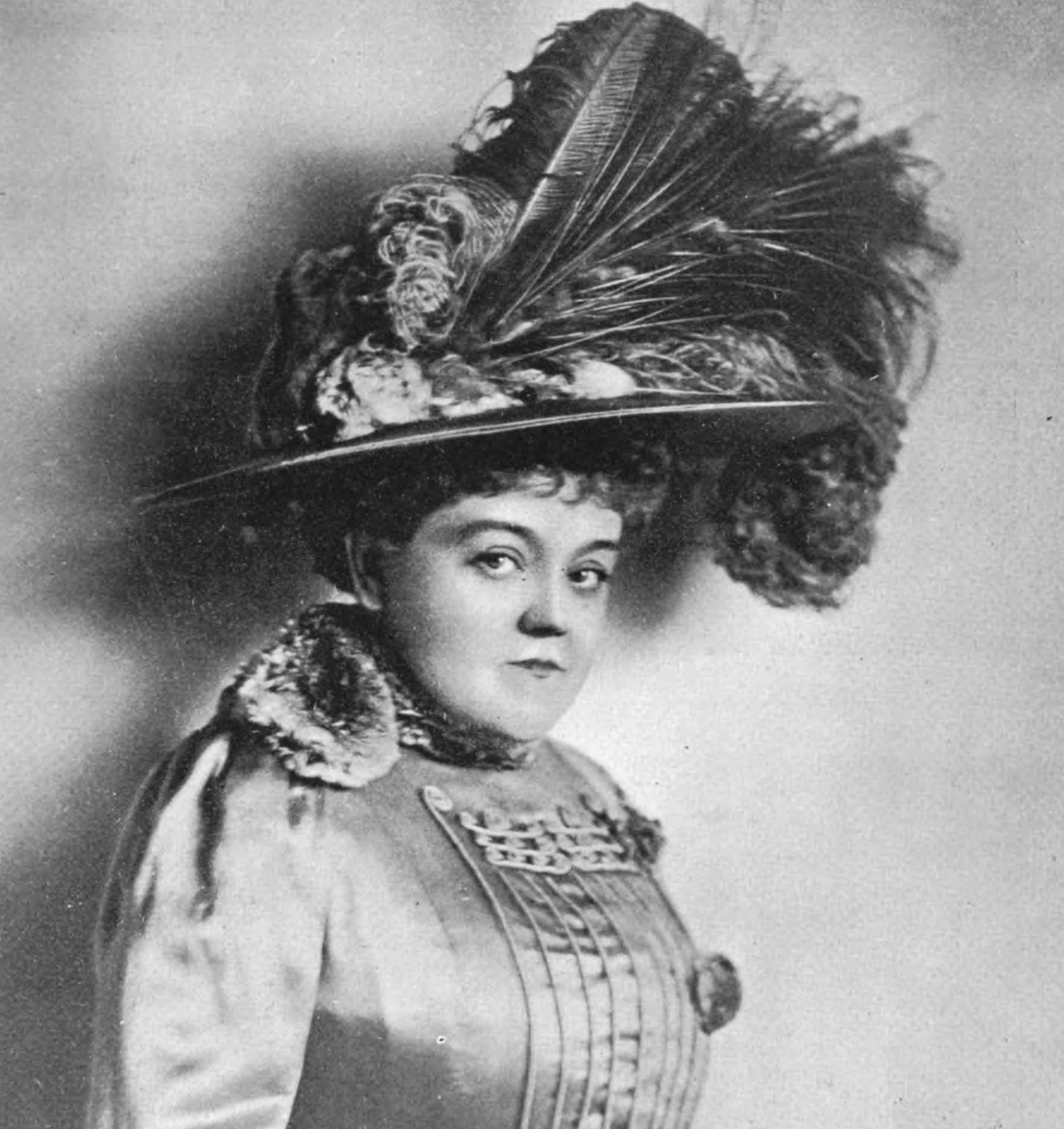 Marie Cahill in 1908. She is thought to haunt The Fulton Theatre. Photo courtesy of Wikimedia Commons.

The Fulton Theatre is a local landmark famously known as the oldest continuously operating theatre in America; however, the dark history and bloody beginnings that the theatre built its foundation on is a less frequented topic. In December 1763, a vigilante gang, known as the Paxton Boys, massacred the last of the Conestoga Indians who were being held in the building for protection following a prior massacre that took place just over a week earlier. The site was later used as a jail, which served the county until 1851. The following year, The Fulton was built on the foundation of the prison. As the Civil War ensued, the theatre was also used as an armory and hospital.

Numerous presences are believed to haunt the theatre today. Several actors and stagehands reported seeing a woman in a white dress hovering around an old spiral staircase. A stagehand once asked what her name was and the ghost replied, “Marie.” Researchers found that an actress named Marie Cahill had performed at the theatre many times.

Another strange occurrence caused a carpenter to run screaming out of the building and refuse to finish his work on the theatre. The carpenter said that he saw a man wearing a light-colored suit, brown shoes and a straw hat. The man approached the carpenter and asked for a cigarette before suddenly disappearing. Other theatre employees have also reported similar sightings.

Prior to the theatre’s 1905 renovation, the gallery was closed to the public due to building codes. A Millersville University professor was running the spotlights for a show when she noticed an older gentleman sitting in the benches. At intermission, she asked the gentleman if he was given permission to sit up in the gallery. He pointed at a young actress on stage and cited her as his granddaughter who he had come to see. However, when the show ended, the man was gone. The professor approached the young actress and told her about what happened in the gallery. The girl said both her grandfathers were dead and had never seen her perform. The professor replied, “Maybe one has now.” 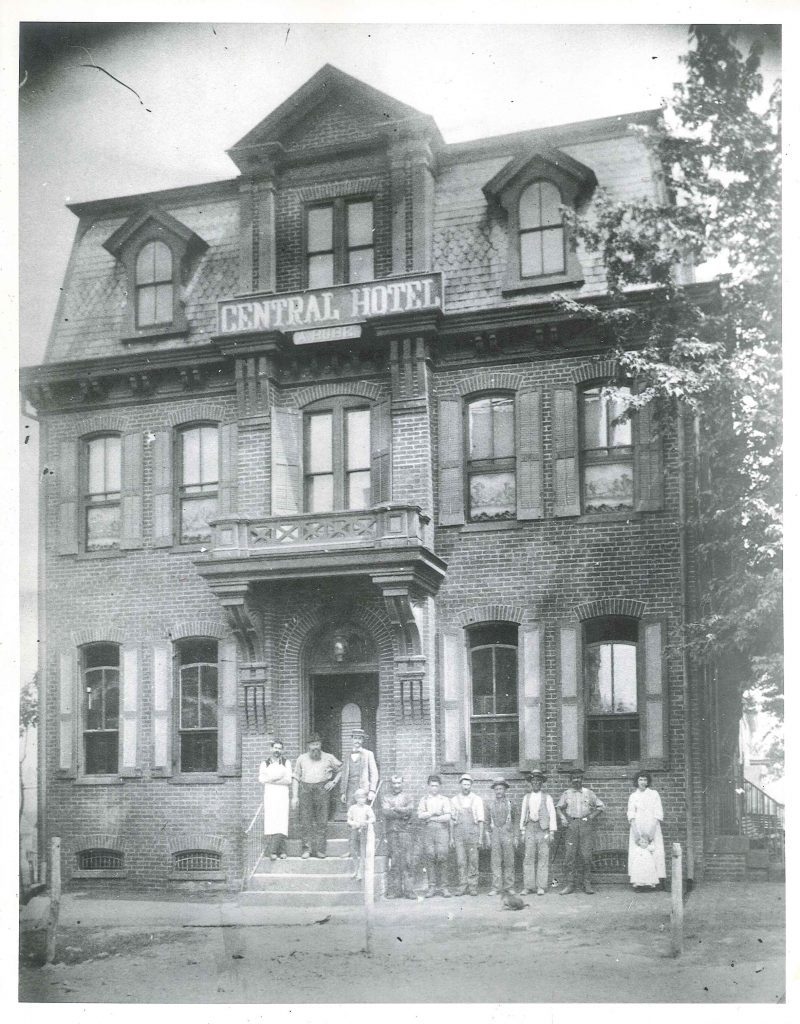 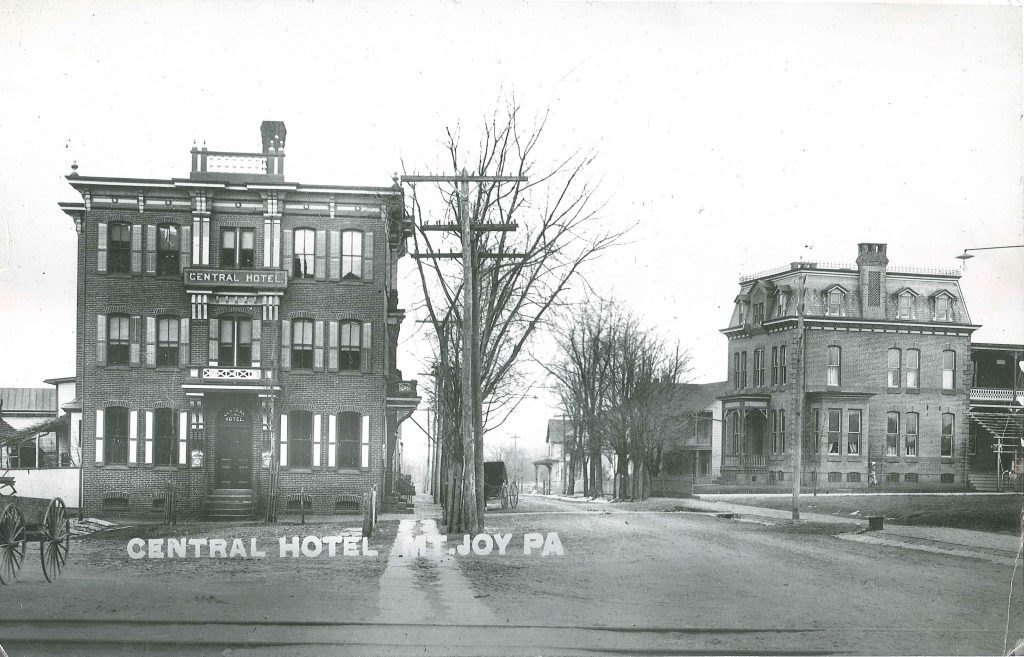 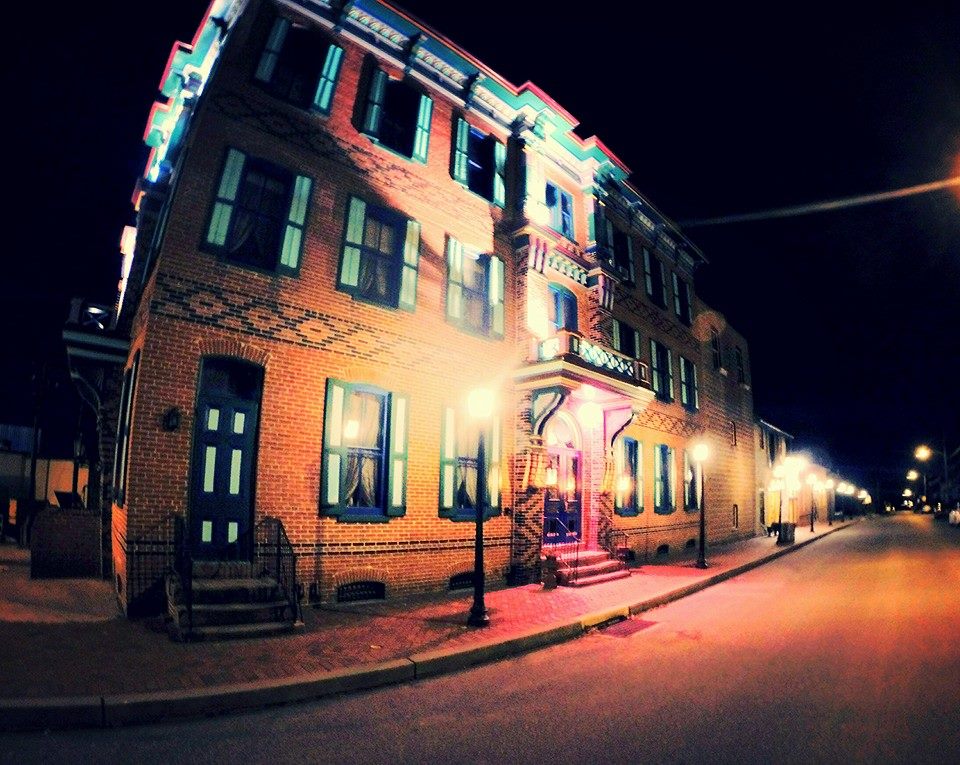 In 1876, German immigrant Alois Bube bought a small brewery in Mount Joy. Over the years he expanded the brewery to include a Victorian hotel. In 1908, Alois died suddenly at the age of 57. Although the brewery closed right before Prohibition, members of his family were able to live in the buildings up until the 1960s. Today, Bube’s Brewery offers dining, lodging, private event space and special events – including ghost tours.

One of the most frequent paranormal sightings is a young woman in a long gown wandering the art gallery. A bartender reported having bottles thrown at him and seeing shadows dart across the lobby. In the Catacombs, multiple women have described feeling something touch their hair or hands.

In 2012, the brewery was featured on SyFy’s Ghost Hunters. During their investigation, the team found ample paranormal activity on the property. The ghost hunters set up an experiment to see if a paranormal presence would blow out an oil lamp. Sure enough, the flame went out despite the lamp containing plenty of oil. During the experiment, the ghost hunters captured a recording of a ghostly voice speaking in German. After translating the recording, they believe the spirit was saying, “blow it out.” The ghost hunters also experienced the sound of a glass shattering at the bar, only to find nothing broken. 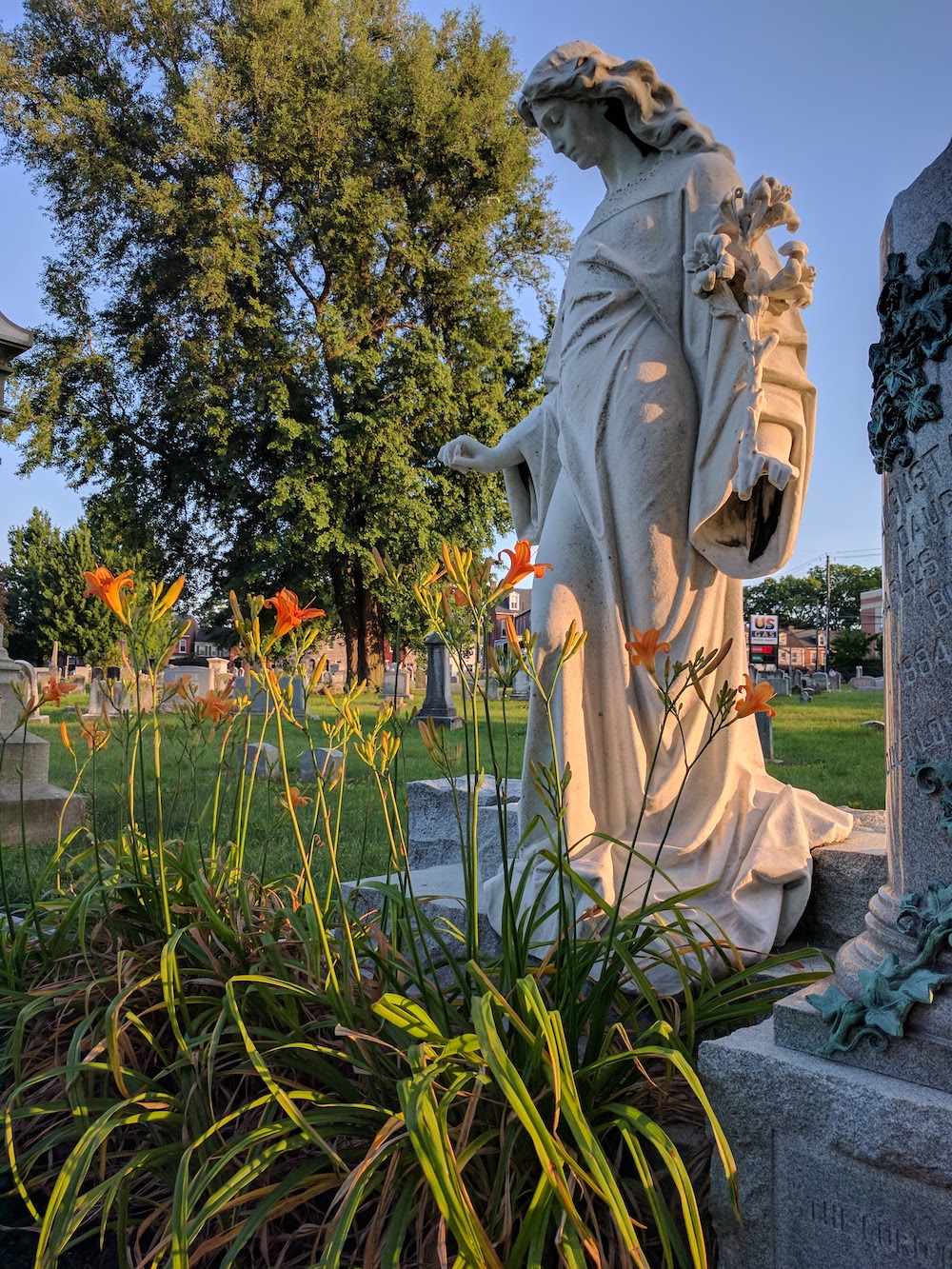 Lancaster Cemetery is home to a hauntingly beautiful statue that has taken on a life of its own in local lore. The statue honors the life of Augusta Bitner who according to legend, died on her wedding day when she tumbled down the steps after tripping on her gown. Her statue is said to wander the cemetery grounds at night looking for her love that she was never able to marry. Some even claim they’ve seen the statue cry real tears.

However, Cynthia Douts Roth debunked the story of Augusta’s death in a 2009 journal for LancasterHistory. Cynthia found that Augusta married Stanley Hart Tevis on May 3, 1905, in her parents’ Marietta Avenue home. Afterwards the couple moved to Philadelphia. Just after their first wedding anniversary, Augusta fell ill with typhoid and died at the age of 21. Augusta’s death may not be as dramatic as the legend claims, but the eerie statue and the story of a young life cut short – symbolized by the broken column in her monument – still make for a chilling story.

Built in 1853, Franklin & Marshall’s (F&M) Old Main was built on the site of Lancaster’s old “gallows hill” where convicted criminals used to be hung. According to F&M’s website, towns used to hang its convicted felons from the highest remote point outside of town for all townspeople to see. In that era, the hill where Old Main is now located was farmland and was believed to be the highest point in the city. Hundreds of years later, Old Main’s bell is said to occasionally ring on its own in the middle of the night. 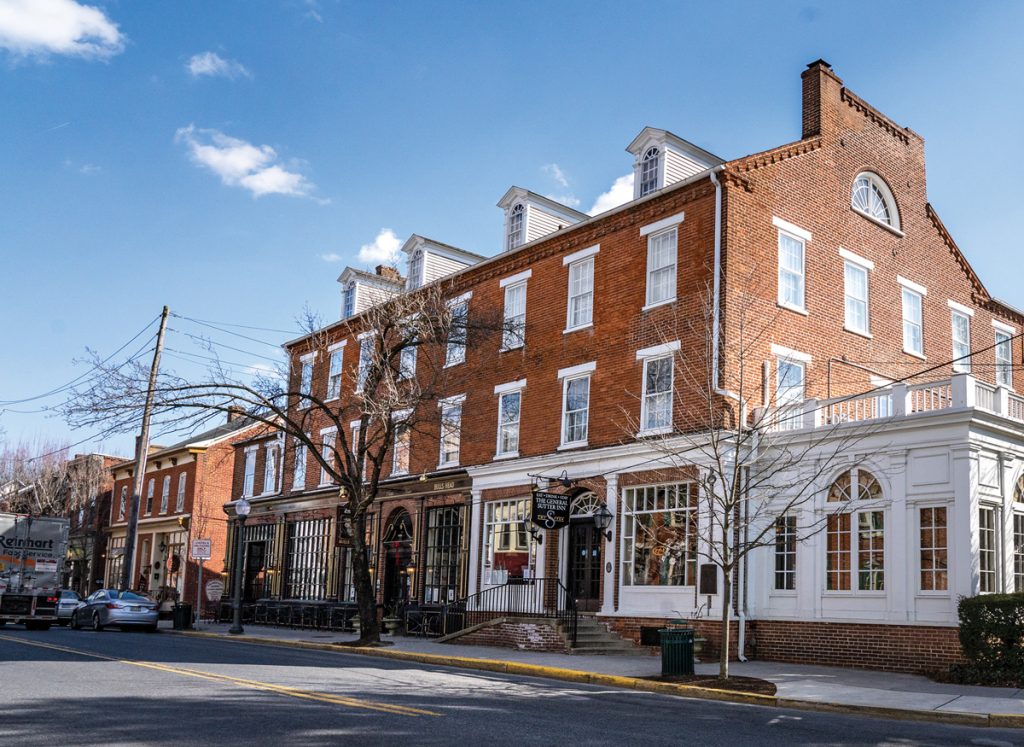 In our October 2018 issue, columnist Michael Upton explored the haunting tales that have emerged from the Lititz Springs Inn & Spa, formerly the General Sutter Inn. The manager at the time confirmed that they have a number of “little children that are running around.” Visitors have reported catching glimpses of children darting into rooms and the pitter-patter of distant footsteps in empty hallways.

Over a decade ago, Kelly Weaver, cofounder of Spirit Society of Pennsylvania, made a visit to the hotel, determined to prove the existence of otherworldly visitors. While she was downstairs eating breakfast with her husband, she left a recorder running in her room. When she returned, her dog was cowering in the corner. After listening to the recording, even Kelly was frightened. The recording reportedly captured the sound of her dog growling in the supposedly empty room mixed with the laughter of a little girl. 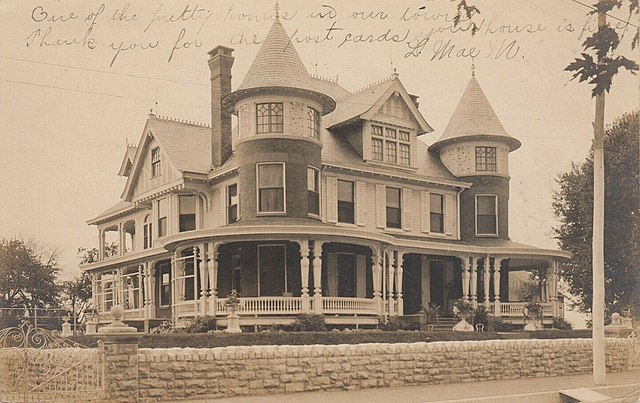 Located on Main Street in Strasburg, the Gonder Mansion embodies Victorian high style and luxury. Benjamin B. Gonder Jr., who was a big name in the local railroad industry, built the mansion in the early 1900s. According to Uncharted Lancaster, Benjamin lived in the house across the street while the mansion was being constructed, along with his wife, their two children and his sister, Annie. When the mansion was completed, the family moved in, with the exception of Annie who was barred from joining them in the home. Instead, she was forced to stay at the house across the street where she longingly stared out the window at the mansion, struggling to understand why her family rejected her.

Benjamin’s wife, Mary, allegedly found her to be an embarrassment, especially when entertaining guests; Annie had a habit of loudly laughing at things male guests said, especially ones she found attractive.

Annie eventually took her own life in May 1918, just a couple years after Benjamin died of a heart attack in 1916. Annie was buried in the nearby Strasburg Cemetery, but her grave was placed to the far left of the Gonder family plot, and the tombstone was turned away from the rest of the family.

Legend says since Annie was banned from living in the mansion, she now chooses to spend her afterlife there. Some have described sightings of a woman moving throughout the halls. Men – and only men – have reported hearing a woman laughing inside the mansion.

The tunnel at the southern entrance of Shenks Ferry Wildflower Preserve on Green Hill Road (which is now closed) is said to be haunted by a young woman wearing a white dress. According to Uncharted Lancaster, the story surrounding the young woman varies. In one iteration, she was murdered in the tunnel, some believe by her husband. Others claim that the woman’s lover died there, and her spirit has lurked in the tunnel for decades, mourning the spot of his death. The most popular version of the story is that a heartbroken bride took her own life at the tunnel’s entrance after being left at the altar. However, according to the late Conrail locomotive engineer, Jack Neiss, an 18-year-old woman was struck by a train directly above the underpass in 1974. Following the incident, railroad crews started reporting a “white angel” dancing on the tracks in the area.

According to legend, if you want to summon the ghost, you are supposed to drive into the tunnel as close to midnight as possible, turn off your car and headlights, put your keys on the vehicle’s roof, walk around the car three times, then get back in and wait for the apparition to appear. After performing the ritual, visitors have experienced trouble starting their car and headlights chasing them out of the woods, as well as lightheadedness among the men in attendance. Note: This section of Green Hill Road is closed, and the preserve closes at dusk. 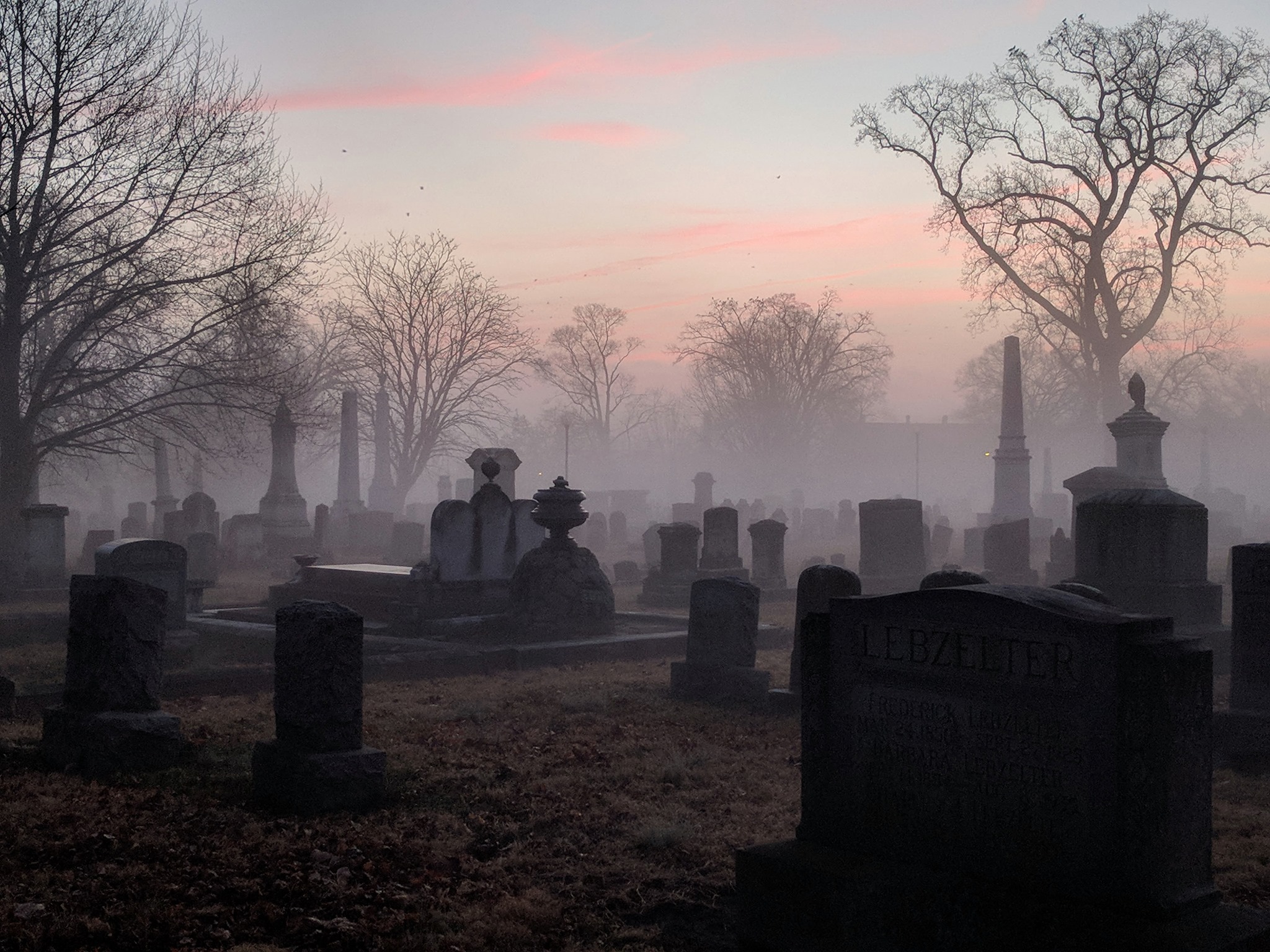