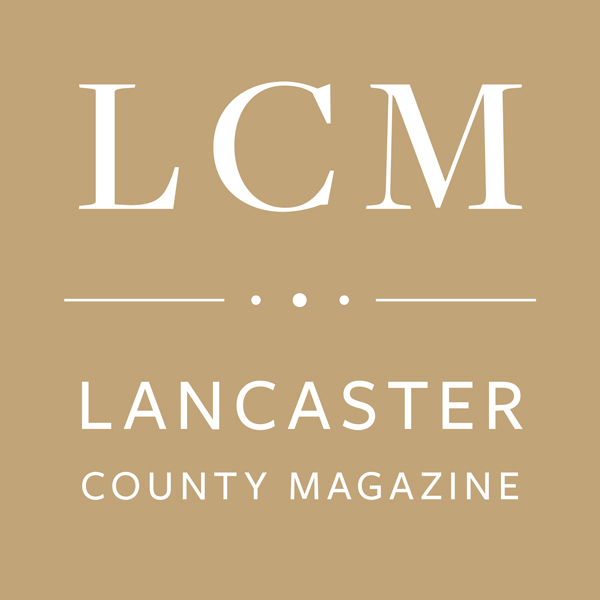 Ned Foltz is one of Lancaster County’s most prolific artists. This talented revivalist redware potter who oversees Foltz Pottery, is ...Read More 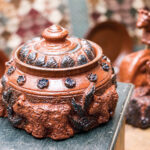 The Creative Spirit
Summer arrives this month, which means it’s time for clam bakes, crab picking and shrimp on the barbie. Or maybe ...Read More 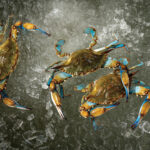 Treats From the Sea
Deep in the onset of the pandemic, when we could not even leave our homes, I sat in bed one ...Read More 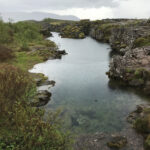 Greatness? A revival? A new direction? Kelly Withum, the executive director of Mainspring of Ephrata, as well as Jim Brown and David Boland, who helped to revitalize the borough’s Christmas celebration, believe all three things are possible. 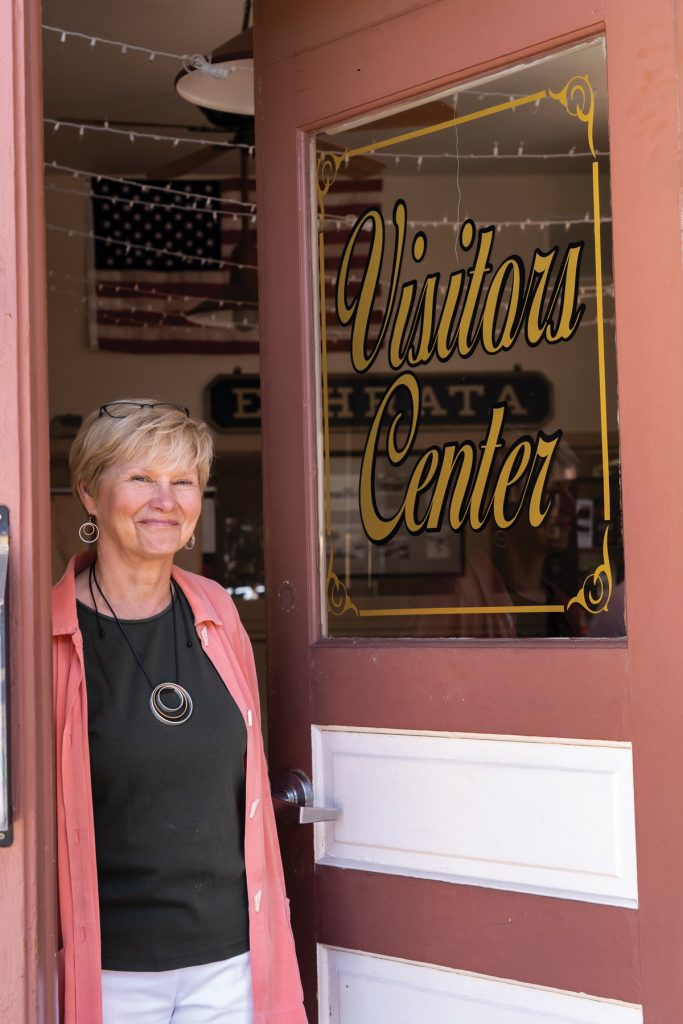 Kelly Withum is the executive director of Mainspring of Ephrata.

Small towns all across America are finding ways to entice both new residents and a new generation of visitors. Peruse the internet and a Top 10, 25 or 50 listing of small towns that are the most beautiful, quaint, fun, exciting or livable pops up on an almost daily basis. It seems that small towns are creating identities that pay homage to their past but look to the future.
In Lancaster County, small towns have been taking a cue from Lancaster City and are recreating themselves.

Ephrata is among them. Last fall, I attended a viewing of a film that celebrated Lancaster’s turn at hosting the Governor’s Awards program. One of the speakers speculated that the city’s rising cost of living could spark a migration of artists to the county’s smaller towns, specifically mentioning Columbia and a new star on the rise, Ephrata. Judging from the businesses that are opening throughout town, Ephrata’s niche might be entrepreneurial opportunities.

Such a sentiment only verifies what business leaders and volunteers in the borough have detected over the past several years. Ephrata is readying itself for a new chapter. Like other successful small-town turnarounds, Kelly stresses that creating a new vision for Ephrata will require hard work, commitment and a can-do attitude. “It all starts at a grassroots level,” she explains. “Everyone from the police to shop owners understand the importance of being friendly and helpful to visitors. Signage is important, too, especially for those using the rail trail.” When she accepted the job, Kelly immersed herself in all-things Ephrata by reviewing previous comprehensive plans and studies. She hopes they can be used as the foundations for new strategies. 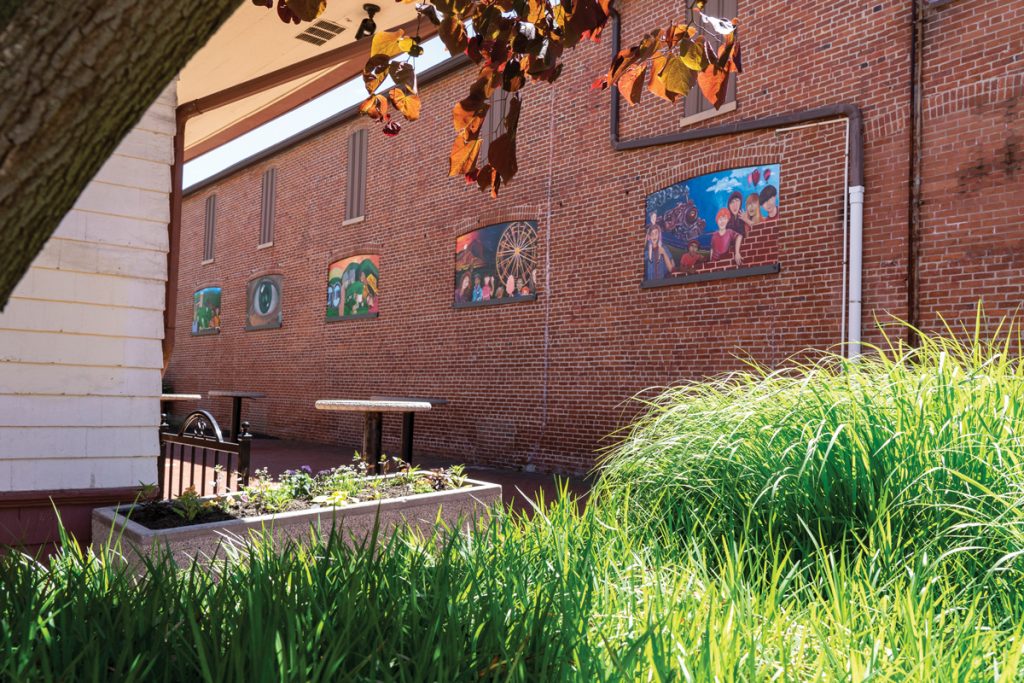 Students from Ephrata High School solved an “eyesore” of a problem – windows filled with plywood – by creating murals that depict what you can see from a train. The students worked with muralist Katie Trainer last fall to plan and carry out the project that brings art to Whistle Stop Plaza.

Ephrata took another step forward by consolidating three existing organizations — Downtown Ephrata Inc., Ephrata Alliance and the Ephrata Economic Development Corporation — to create Mainspring of Ephrata, whose mission is to promote the economic vitality of the Ephrata community. Mainspring of Ephrata is governed by a 13-member volunteer board of directors comprised of residents, business owners, professionals, educators, borough personnel and representatives from other community nonprofits. While each of the organizations played key roles in various components of Ephrata — sponsoring community events and the development of Mountain Springs, a mural and Whistle Stop Plaza — having one organization allows the combined talents of its members to be focused on one goal.

Fortunately for Ephrata, Kelly has been on the front lines in helping Lancaster and Lititz revitalize their downtown areas. “Ephrata has so many assets working in its favor,” she says, pointing to the downtown area, its parks and greenspace, its historical sites and the performing arts. “Connecting all the dots will only make the community stronger.”

So, where do you begin? Jim and David say how people perceive Ephrata is a good place to start. “People think it’s so far away,” Jim says of the challenge that exists to entice visitors to travel 10 miles up Route 222 from Route 30. David, who operates the retirement community The Groves in Ephrata and is a member of the Mainspring board, says he sometimes makes the trip from his home in Lancaster several times a day. “It’s really not a big deal,” he says. But, then again, Jim admits that Ephrata residents have a similar mindset and think Lancaster “is a haul,” which results in a disconnect. Just as people who live in Elizabethtown head for Harrisburg and Hershey for shopping and entertainment, residents of northern Lancaster County often head to Reading.

Of course, Ephrata boasts a heritage unlike any other small town (with perhaps the exception of Lititz) in Lancaster County. Jim, who maintains the archives of the Ephrata National Bank and is a board member for the Historic Preservation Trust of Lancaster County, calls The Historical Society of the Cocalico Valley “a tremendous asset.”

The three also point to the Eicher Arts Center as a wonderful example of Ephrata’s heritage. Even Mainspring’s office speaks of Ephrata’s history, as it is located in the original train station that escaped demolition and is now the centerpiece of the multifunctional Whistle Stop Plaza. At 100 years old, the Ephrata Fair has come to represent a sense of community that is rarely found anymore. 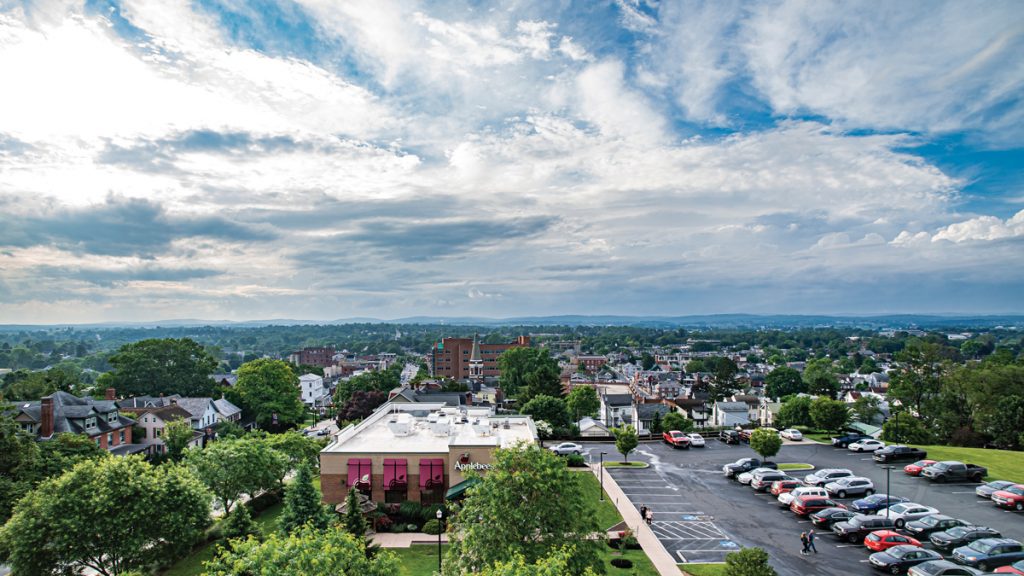 Relatively new to the allure of Ephrata are the greenspaces being made available to residents and visitors. There are more than a dozen parks, playgrounds and trails in the borough. Of course, everyone is excited that the Warwick to Ephrata Rail-Trail (WERT) is nearly complete. The trail connects Lititz to Akron and Ephrata. In Ephrata’s case, it passes through the center of town, enabling restaurants and shops to benefit from the foot and bike traffic.

The newest project is Heatherwood Bike Park, 18 acres of hilly woodland located between Ephrata and Akron. Kelly explains that the project will turn an area with a sketchy reputation into a passive park that will be dedicated solely to mountain biking and trail running. It will be the first park of its kind in the state. “We’ll be turning a negative into a positive,” Kelly notes. “Visitors will be able to have fun and enjoy the outdoors.” Another bonus is the fact that the acreage is adjacent to WERT. A GoFundMe account aims to raise $8,500 for the project. A cleanup day was held April 27. Three breweries in the area – St. Boniface, Black Forest and Pour Man’s – collaborated to create a special brew called Ale for Trails, proceeds from which will benefit the fundraising effort. Each brewery will be selling it this summer. 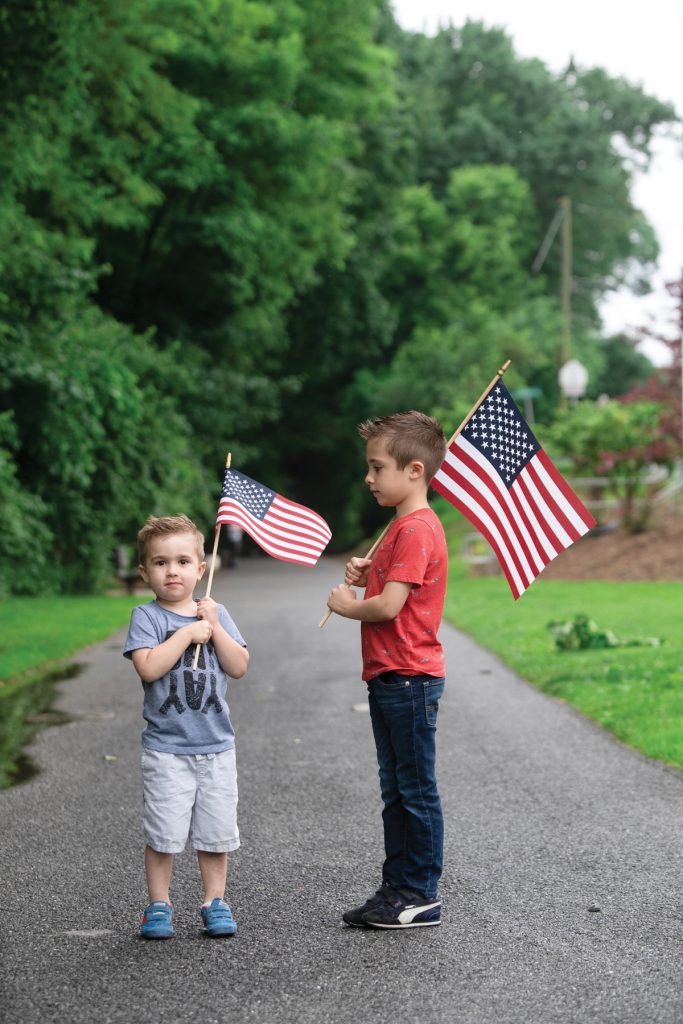 With more than 322 acres dedicated to recreation, Ephrata boasts the largest park system per capita in the state. New to the system is the Warwick to Ephrata Rail-Trail.

Making Ephrata an attractive and livable community is also part of Mainspring’s mission. “Opportunities for home ownership abound,” Jim points out. For those seeking period architecture, there’s good news. “Homes within the borough that were divided into rental units are being converted back into single-family homes,” he adds. If modern living is more your style, builders such as Garman and Landmark are developing everything from townhouses to 55+ communities in areas around Ephrata. There are at least a half-dozen senior living communities in the area.

Potential homeowners are often concerned about the school system, and Kelly describes the Ephrata Area School District (which ranks ninth in the county per the annual U.S. News & World Report rankings) as “amazing. We’re working with them on several projects.” She sees students as representing “the future of our community.” Another resource of which Ephrata is proud is its public library. “It’s a very successful and top-notch library,” Jim says.

The three are also very complimentary of the borough’s leadership and point to the solar farm that it owns and operates, supplying 4 to 5% of the borough’s electric needs. They are also happy to see natural gas being introduced to the borough. “Obviously, UGI is looking at the town as an opportunity,” Jim says, noting the introduction of natural gas will be a boon for restaurants and even area businesses.

In order to assess how attractive Ephrata is to potential residents, Mainspring conducted a series of focus groups, including one composed of millennials. “This is a very different kind of generation in regard to what they want in a hometown,” Kelly notes, adding that walkability, craft beer, coffee, organic food and opportunities for community involvement and entrepreneurship are important to them.

While Jim and David don’t live in Ephrata, they’ve become very involved as volunteers. They are most proud of the Christmas in Ephrata event they and Cindy Mellinger helped to revive. Held on the evening of Black Friday, the family-friendly event features Toyland, wagon rides, crafts, games, food trucks, a tree lighting, a laser light show, music, carol singing and a visit from Santa Claus, as well as the Belsnickel. The tradition dates to 1923, but over the years, attendance waned. When the three became involved, maybe a few hundred turned out. “Last year, we had 9,000 attend,” David reports. 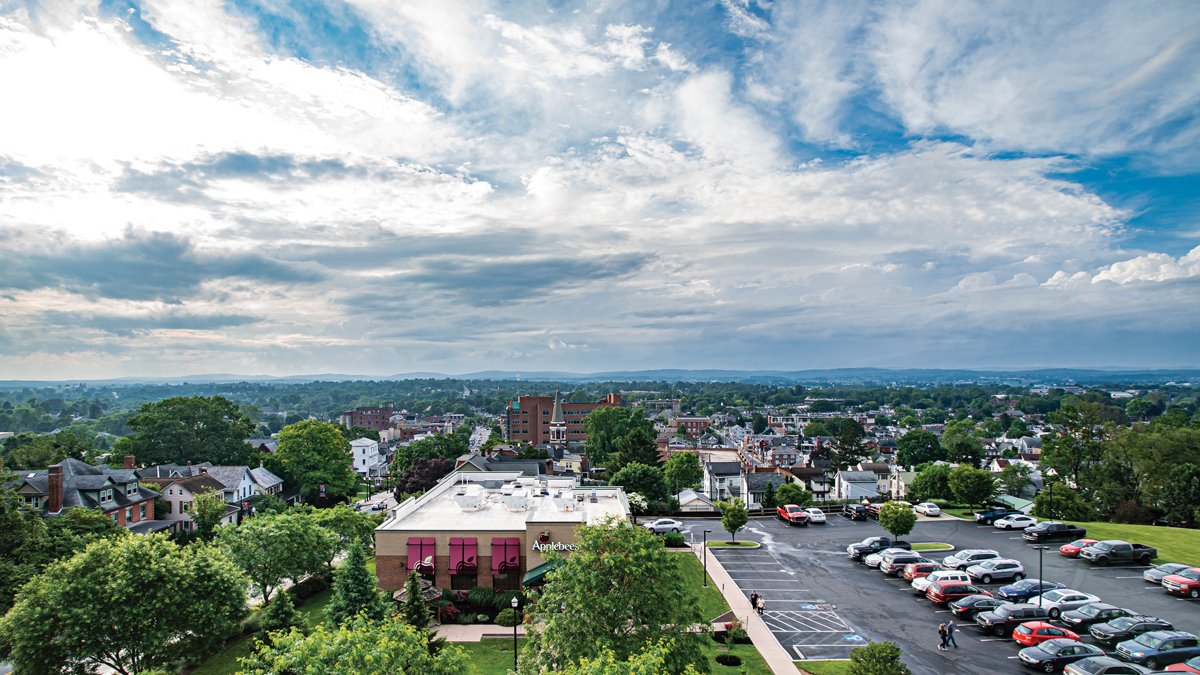