Two-hundred-forty years ago, Colonial America declared its independence from England. Victory followed, and the young Republic faced the task of choosing a suitable location to serve as the nation’s capital. Columbia was in the running for that honor, only to lose by one vote.

One can only imagine what Lancaster County would look like today if Columbia had been declared the nation’s capital. Around D.C., urban sprawl extends 30 miles (and growing) in all directions, which means our farmland would be gone (no Turkey Hill!), our highways and country roads would be replaced by webs of interstates, and Lancaster City would be relegated to being a D.C. neighborhood (Georgetown, maybe?). And sadly, our small towns would simply be footnotes in history books. Marietta, Mountville, Maytown, Mount Joy – the list goes on and on – would all be gone.

But, it didn’t happen. Instead, Lancaster County is home to Train Town USA (Strasburg), and according to Smithsonian magazine, “One of the Best Small Towns to Visit” (Columbia). And, we can’t forget the “Coolest Small Town in America” honor goes to Lititz.

Take a tour of four of our small towns with the following residents as your guides.

Twenty-five years ago, Ray and Megan Smecker became residents of Churchtown. “We couldn’t be happier or prouder to live here,” Ray says.

Cle Berntheizel grew up in Columbia, lived for a time in New York, and realized there’s no place like home. Now, he’s proud to be part of the town’s creative spirit.

After nearly a decade of living in Elizabethtown, Jamie Schoenberger of Epic Photography considers the slice of Americana her home now.

Michael and Linda McCullough live in a house on the edge of Strasburg Borough that dates to 1893. 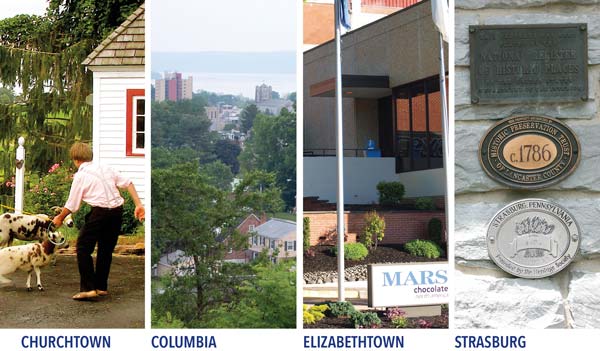